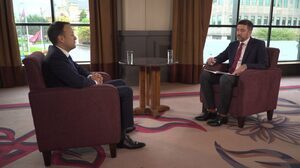 Though it has appeared to slip by without much political comment, the Taoiseach’s BBC TV interview last Tuesday (October 16) showed that he is not quite the master of the medium that his friends would have us believe.

He was being interviewed as part of a BBC Northern Ireland Spotlight programme profiling our neophyte Taoiseach. It looked at his life and his rise to high office, with a focus on how he has approached the North and Brexit over the four months since becoming Taoiseach.

It was a fairly standard profile format. A 40-minute programme featuring a one on one sit-down interview, interspersed with archive clips and packages on specific issues.

Though it was no fawning hagiography, neither was it the most demanding or probing of interviews. The interview section took up less than 50% of the show, with questions on current political issues only taking up about 40 – 50% of that portion: about 8 – 10 minutes.

But for a good portion of those 10 minutes the Taoiseach struggled. But, worse than that he also demonstrated a blissful ignorance of a key element of relations both on and between these two islands.

His first stumble was on the issue of Brexit, specifically on the right of people in Northern Ireland having the right to exercise their EU citizenship.

The interviewer asked him if Ireland would be prepared to pick up the tab where someone from Northern Ireland holding Irish citizenship – and by extension EU citizenship – had an operation in another EU state. As the UK would by then be outside the EU, would the bill for the procedure be paid by the Irish government, he enquired?

A technical, not to mention hypothetical, question which seemed more designed to highlight the interviewer’s research skills, than to elicit information that might help the punter gain a better understanding of the issue.

It was the kind of question for which The West Wing (TV series) mantra: “never accept the premise of the question” could have been coined.

But the Taoiseach – a former health and social protection minister – did accept it followed by the uncomfortable sight of seeing him struggle to grasp the underlining concept and, then, eventually work his way through to an answer.

Similarly, when asked about his views on Sinn Féin, the Taoiseach essentially spoke of it as just another political party. Not exactly the line he has been pushing in his recent Dáil spats with Gerry and Mary Lou. If Micheál Martin were asked that question the word ‘cult’ would feature prominently in his reply.

Though it was cringe-making, even for a non-fan like me, if the Leo interview had ended there, then it would have been a passable performance. But it didn’t.

Asked, at the very end of the programme, if Brexit had made a United Ireland more or less likely, the Taoiseach not only went off piste, he went clear off the mountain range.

He started out fine. He opened his response with the obligatory reaffirmation of the Irish government’s commitment to the Good Friday Agreement but then, before our eyes, the Taoiseach morphed into ‘Leo Varadkar: Precocious Wunderkind’ and attempted a single-handed redefinition of consent effectively junking a central tenet of the Good Friday Agreement, saying:

“…I wouldn’t like us to get to the point whereby we are changing the constitutional position here in Northern Ireland on a 50% plus one basis”.

“One of the best things about the Good Friday Agreement is that it did get very strong cross-Border support, that’s why there was a 70 per cent vote for it. I don’t think that there would be a 70 per cent vote for a united Ireland in the morning, for example, or anything remotely to that. And I really think we should focus on making the agreement that we have work.”

Worse still, he did it all unaided. There were no interruptions or interjections from the interviewer. No one else brought up 50% plus one, the Taoiseach did it all by himself, out of his own mouth.

Was this Leo making a major policy change on the principle of consent on the hoof or was this him failing to grasp a core policy position that has been around since the mid-1990s?

Regrettably I fear it was both.

This was the Taoiseach making up a policy on an issue he seemed fundamentally unable to grasp.

I say this as his address to the Derry Chamber of Commerce, a few days before the programme was aired, echoed the same approach, though without the reference to a 70% threshold.

What this Taoiseach fails to grasp, in contrast to his predecessors, including his most immediate one, is that consent is at the heart of the Good Friday Agreement. It applies equally and in parallel to both communities, as Seamus Mallon said at the 1998 British Labour party conference:

“Equality, parity of esteem and parallel consent are written into the Agreement – they are core of the new dispensation which we can and will implement.”

Simply put, you cannot say to one community in the North that the bar for their aspirations is to be set higher than for the other, whether that is 2, 5, 10 or 20% higher. That is the approach that prevailed in the North for decades.

The Taoiseach also fails to understand that the Good Friday Agreement, whose text appears on the website of his department, is not just a political document setting out some vague hopes and dreams, it is a sovereign agreement between two governments. It is a legal agreement that sets out the legal precepts underpinning the peace process and not something he can amend on a whim.

If his intention is to convince Unionism that he is their friend, then he will fail as they will see his comments as either patronising or undeliverable – or, both.

If his aim is to score political points off Gerry Adams’ fatuous calls for a border poll, then he will also fail. Not because there will be a Border Poll – there won’t – but because he is answering to Adams’ dog whistle.

The answer is not to raise the figure up from 50%+1 for one community, but to remind all those who demand a Border poll that with 50%+1 comes a great responsibility, a responsibility to make that situation work for more than just those who favour it.

Bizarrely, this is the point where Varadkar and Adams’ joint playing with numbers on consent risks unpicking the concept that made the agreement possible.

Perhaps I am wrong. Perhaps what we saw on BBC Spotlight last week was not a Taoiseach making up policy on the hoof, but one who is so convinced by his own hype and spin that he went on to a TV programme ill-prepared and decided to just “wing it”.

Either way, the outcome is that he exposed his own lack of knowledge for no gain. He talked big, achieved nothing and managing to piss off all sides while doing it – just another average day for this government.

15 thoughts on “Leo Fades In Spotlight”