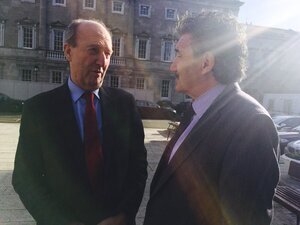 Ireland’s main banks are expected to release statements in relation to the tracker mortgage scandal.

The Independent Alliance has called for tougher measures to deal with banks on the issue of tracker mortgages.

The Minister of State for Training, Skills, Innovation, Research and Development John Halligan called for an independent body to deal with compensation, because he said the banks ‘can not be trusted’ in that regard.

He also called for a criminal investigation to take place because he said the banks took money fraudulently from people.

“It has to be investigated and there should be a criminal investigation”, he said.

The Minister for Transport Shane Ross said the Independent Alliance is of the view that the banks have “gone rogue” in a market that is not operating properly.

“They don’t have morality, they don’t respond to moral suasion and we’ll support any tough measures taken by the Minister for Finance today and playing hard ball with the banks”, he said.

And The Lesson Today