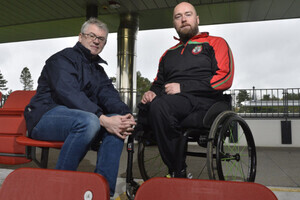 On Sunday, Joe Brolly in the Sunday Independent reported that a former PSNI  Police Service of Northern Ireland] constable was ‘ostracised’ by his GAA club after joining the force.

Paeder Heffron was left in a wheelchair following a dissident republican car bomb in 2010.

Mr Heffron said he was frozen out of games by Kickhams Creggan in County Antrim and ignored by teammates, with republicans ” approaching him in a changing room and handing him a leaflet warning of the dangers of joining the PSNI”.

The PSNI have opened recruiting as of October 23  this year. The aim of the PSNI is to have a balanced force of 50/50 Catholics/Protestants, under The Patton Report – currently it’s @15-25% Catholic,depending on which figures you are given, or believe.

Growing up, we had the RUC, who seemed to have a licence to unleash some form of justice against Catholics. I’m living back in the North of Ireland for a few years now, I have to say the PSNI seem okay.

The GAA have let one of their own down. I feel ashamed that I associate and am a member of the GAA.

Joe Brolly: Spurned, bombed and maimed by his own kind (Independent.ie)

YOU Are The Ref

13 thoughts on “Be There All The Way”