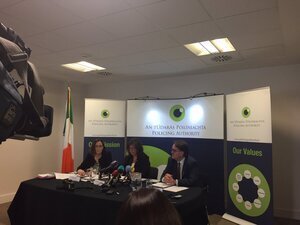 Readers may recall how, in March, it emerged that there were nearly one million (937,212) phantom Garda breath tests recorded by gardai between between November 2011 and October 2016.

In September, a review carried out by Assistant Commissioner Michael O’Sullivan found there were more than 1.4million (1,458,221) fake Garda breath tests recorded between 2009 and 2016.

Readers may recall that, at the time Assistant Commissioner O’Sullivan’s report was published, it was reported how the Policing Authority had hired financial auditors Crowe Horwath to conduct its own independent investigation into the matter.

This afternoon, the Policing Authority has published that report.

In addition, the report states:

“From our engagement with frontline Gardaí and supervisors (sergeants) across the organisation, it was reported that some members would inflate the number of MIT checkpoints recorded on PULSE, and thereby the number of breath tests, in order to be seen to have delivered the number of checkpoints authorised for that tour of duty.

“For example, a number of Garda members in a busy urban station told us that they were frequently under significant pressure when on patrol, and at any given time might have six or seven backed up calls awaiting their response, which would be prioritised in order of seriousness.

“They explained that whilst they fully understood the value of operating MIT checkpoints from a road safety perspective, they simply couldn’t manage to perform all of those which had been authorised, and the habit had therefore developed of entering erroneous data onto PULSE – for instance, if three checkpoints were authorised and only one was carried out, two checkpoint incidents might be registered on PULSE and false data entered in respect of the checkpoint which had not been operated.”

“We were also advised that on occasions, supervisory sergeants would suggest that the numbers be inflated in order to comply with management expectations relating to MIT checkpoints being operated.

“We have also heard from serving and retired Garda members who have told us confidentially that some MIT checkpoints were authorised and recorded as having been performed, but were later found not to have taken place, whether due to the pressure to record compliance with the authorisations or (as suggested in some cases) Garda members taking advantage of the lack of frontline supervision and remaining in the patrol car or in the station rather than conducting the checkpoint.

“This tendency seems to have been particularly prevalent amongst regular uniformed Gardaí, whose operational policing duties cover a wide range of activities, and who would therefore often find themselves in a situation where the operation of MIT checkpoints on a given day would be far down their list of priorities.”

“During our visits to the 28 Garda Divisions, we asked many frontline and supervisory members about the sense of pressure to report performance in respect of MIT checkpoints. We were frequently told during these visits that there was no formal requirement in that regard, and no documentation was presented to us in respect of directives from Garda HQ or from regional or Divisional management to meet any qualified performance targets.

“Instead, the pressure was apparently more implied rather than explicitly stated, and often related to actual (as opposed to forecast) performance figures presented at Divisional or regional meetings: no Division wanted to be “bottom of the league” and there was often a degree of competition and rivalry between Divisions (i.e. if one Division showed a 5% increase in the number of MIT checkpoints operated, then a neighbouring Division would want its performance to at least match that).”

“This was interpreted by many frontline and supervisory Garda members as meaning that MIT checkpoint data needed to be maximised. By contrast, the prevailing view from Divisional Officers at Chief Superintendent level, and from other members of local management teams, was that there was never any such pressure placed upon frontline members and supervisors.

“Indeed, many senior Divisional members were of the opinion that they were happy if checkpoints didn’t take place, provided a valid reason was given.”

In addition, it found, contrary to claims made by some senior gardai that there were no performance targets, there is evidence of specific targets being set for checkpoints and breath tests.

“…we have reviewed a selection of Divisional Policing Plans published during the period 2009 to 2016, and it would appear that in a number of these plans there are indeed specific targets relating to both MIT checkpoints and breath tests.

“In relation to the latter, it is not clear whether these are breath tests conducted at MIT checkpoints or those carried out either at the roadside or in Garda stations as a result of other operational policing activities.

“It is certainly the case that some Garda Divisions set and published targets for the performance of MIT checkpoints and breath tests on an annual or quarterly basis, which again is at variance with some of the claims by senior officers that no such targets existed.”

“Our view is that it is highly unlikely that there is any connection between the inflation of MIT checkpoint data on PULSE and any personal gain which a Garda member may have wished to attain. Clearly, fabrication of MIT checkpoint data to justify a false claim for overtime payment would represent both a disciplinary and criminal matter, but we have seen no evidence to suggest that this actually happened.”

At the press conference…

We were dismayed by this last March. This report affirms that dismay. Other forces have problems with police shooting civilians… pic.twitter.com/cS4VUHcwRK

Another Half A Million

The report can be read here