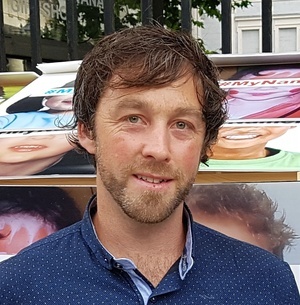 We live in extreme times. Extreme inequality – where the 8 richest men on the planet have the same wealth as half the entire global population. Here in Ireland the top 20% own half of all the wealth.

But it is also a time of extreme insecurity – a deep sense of fear and trepidation about the present moment (and the future) – how can I have some sort of decent life, or even just survive?

Be that trying to access an affordable secure home, hospital treatment or a living wage. And then there is our children – we are deeply worried about how we can ensure they have the possibility of a better now and even more importantly, a better future.

It is also a time of extreme individualism – where people (once known as citizens with rights) have been commodified by corporations into perpetual ‘consumers’ of products.

And the future increasingly looks like it is going to be an extreme dystopia (some of you might have seen this depicted quite well in the recent movie, Bladerunner) of digitisation and automation.

This presents a horizon of unlimited exploitation of the majority – as human consumer-slaves – by the corporate super-elite, global financial markets and their ‘bots’. And within all this is politics which is ever more distant from the people – hollowed out democracies where politicians and government serve their banker, corporate and financial market masters to the exclusion of their citizens.

But there are signs of hope.

New ‘citizens’ movements are emerging to try challenge this age of extreme inequality, and they are trying to create a new politics that actually represents the majority – and not just a wealthy elite and corporate interests.

From the Momentum movement that has been the backbone of the phenomenal rise in support behind the Labour Party and Jeremy Corbyn in the UK, to the ‘People for Bernie’ Campaign supporting Bernie Sanders in the US, and the 15M and Podemos movements in Spain (visible also in the Catalan independence protest).

Here in Ireland we have seen new movements emerge to challenge the injustice of austerity and the unequal recovery –from small grassroots groups like the Ballyhea says no to Bondholder Bailout in Cork to the incredible Right2Water movement that involved hundreds of thousands of people from across the country.

We saw it too in the occupation of Apollo House last Christmas that drew attention to the homelessness crisis, the Tesco and Dunnes’ strikes by workers for a living wage and conditions, and, again in the recent Repeal the 8th pro-choice protests.

There are also tens (if not hundreds) of thousands of citizens acting in co-operative and solidarity ways (i.e. not just consumers) across this country in citizen’s movements, protests, community groups, volunteering with an NGO or homeless support groups, helping to build co-operative ‘not-for-profit’ housing, being active in trade unions.

But you are told every day in the media, at work, in universities and school that you can’t change things and so you just have to accept this age of extremism – be it homelessness, high rents, climate pollution, corrupt politicians, child poverty, unaffordable childcare, and contract work.

But these movements, action, protest and politics challenge this consensus of passive acceptance and assert that there is an alternative and better path. Most importantly, they provide an alternative way of living than just being the atomised, individualised and alienated consumer that is the current dominant form of so-called living today.

This co-operative action, where we work with others to help bring about change for ourselves and the community, country or organisation around us, is a fundamental challenge to the dominant economic thinking that sees us as people seeking individual profit maximisation in a Darwinian ‘fight for survival of the fittest’.

But interestingly, psychological studies on people’s well-being show that “engagement in collective civic action toward a common purpose increases connected­ness among individuals in a community, and connections to fellow human beings satisfy a basic human need for belonging….(which) stave off social isolation and depression”.

We have been sold the neoliberal ‘free-market’ myth that happiness comes from fulfilling our individual material consumerist desires -from having the latest technology – from purchasing what we ‘want’. But in fact, the state of the world around us – be it our community, our country and the planet affects us deeply in a psychological-emotional way.

Our identity and our sense of well-being is affected by the well-being of others.

This is profound as it suggests we cannot be happy if we see fellow citizens in our community suffering. So taking action – like protest – against inequality is not just an act of self-interest or charity – but a logical response that recognises our welfare is bound up with the welfare of others. And it has been found that more equal societies (where clearly the values of solidarity and cooperation are dominant) do better.

However, politics and our shallow democracies in this age of extremism have become a major problem.

Civil society movements can protest and change the frame of debate and influence some policy change but it is at government and national parliament level that decisions are made about the direction of our economies and societies. Increasingly it is in authoritarian, conservative right-wing ways.

But the movements in support of Corbyn and Sanders have recognised this – that the power of the people needs to create a new politics in government that is willing to challenge the power of the privileged, financial markets and corporations.

Here in Ireland, in the run up to the 2016 general election, the successful Right2Water campaign established, Right2Change, a political campaign which sought ‘a fairer, more equal Ireland that benefits all of the people rather than a select few’.

Right2Change developed with the participation of community activists, trade unionists and political representatives, ten policy principles that would underpin a ‘progressive Irish government’ (i.e. a government led by parties of the left and independents, rather than the two right-wing parties of Fianna Fail and Fine Gael that have shown time and time again, decade after decade, their inability and unwillingness to create a fair and socially just society). The principles included the right to water, decent work, housing, health, debt justice, education, democratic reform, equality, a sustainable environment and national resources (read them here  ).

Right2Change convinced 100 candidates to enter a voting transfer pact (including Sinn Féin, People Before Profit and independent candidates) in the 2016 general election. They got 19% of first preference votes and 36 out of 158 seats in the Dáil.

The establishment parties (Fianna Fáil, Fine Gael, and Labour) received their lowest combined support in the history of the state.

But what has happened to the momentum for change since that election? The establishment politics of Fianna Fáil and Fine Gael backed each other up to ‘shore up the centre’ (ie. protect the status quo) and form a new government of the centre-right.

The various left parties (including Sinn Féin, Social Democrats, People Before Profit etc) and independents, while each have done great work on various issues, they have not worked on developing a common vision, co-ordination or manifesto for a forthcoming election.

And while, despite the housing emergency and wide-scale housing crisis affecting a broad range of people, a citizen’s housing movement has yet to appear although it is growing and could yet emerge from Apollo House, local grassroots housing actions and national housing coalitions. Worth noting that this Taoiseach and the government are building their politics on a PR-image and veneer of addressing issues.

This makes them very vulnerable to anything that shatters that shiny image. Therefore, a large protest campaign uniting private renters, the homeless, those in mortgage arrears and those waiting for social housing together highlighting the devastation caused by the housing crisis would present a formidable challenge to that image and thus the government).

However, with the apparent lack of a broad united left political and citizens movement alternative the most recent opinion polls have shown the centre-right alliance of Fine Gael and Fianna Fáil recovering in public support.

But all this can change utterly in an instant as our election (where Fine Gael did much worse than expected) and the recent UK and US elections have shown. Citizen’s movements and new politics that offer hope and a positive vision for a future based on equality can dramatically change the political landscape.

That is why I will be speaking at the ‘Another Ireland is Possible’ Right2Change conference this coming Saturday in the Mansion House in Dublin. I believe, and I know many others do too, that we need a citizen’s movement for hope in Ireland that can transform our country into a Republic of Equality for all.

I will be talking about the housing crisis, solutions that could provide affordable housing and the role of people, citizen action and the need for a genuinely new citizen-led politics to bring about this change. The conference is open to the public and organisers are “encouraging everyone who shares a vision for a fairer, more equal Ireland to join us on Saturday, 4th November 2017 to discuss a pathway towards achieving a truly egalitarian Republic”.

Wealth has the power. But citizen’s movements create a counter power that can challenge all others. It is the power of ordinary people to take away the legitimacy of the government –to withdraw the consent of the people. If enough people protest the government has to listen. The water movement showed that.

But movements and politics must unite in order to create this power. They must bring together all the groups excluded – from the middle and working classes, public and private sector workers, unemployed, lone parents, the youth, disabled, migrants – into a power that government cannot ignore. All those groups working on their own can effect some change but it cannot radically transform societies and economies.

And that is what we need now- not tinkering around at the edges of a system that is producing such extreme inequality and human misery. We need transformation to bring about a caring and flourishing society that the economy serves and not, as we have it now, an economy that dictates and destroys society.

The sad reality is we should be living in an age of extreme hope and not despair. With digital technology and the massive wealth that exists globally (and in Ireland) we should have a world without poverty, without homelessness.

Here in Ireland there is no reason why we can’t have a Republic of equality for all (not just the Taoiseach’s ‘Republic of Opportunity’ for the privileged few) where we guarantee decent housing, health care, education, quality employment, liveable communities, and sufficient caring support to the young, old and disabled- to everyone. Countries like Sweden and Denmark can do it.

Poverty and inequality are not inevitable –they result from societal and political priorities and choices. We need a new politics, and citizen’s led movements to change the current priorities – and to turn fear into hope.

You can register for the November Right2Change conference here (speakers from the ‘People for Bernie’ Campaign, Spanish 15 M Movement, Union of Students in Ireland, Right2Water, Housing/Homeless and Decency for Dunnes workers campaigns)

A Profile In Pettiness

64 thoughts on “How Another Ireland Is Possible”