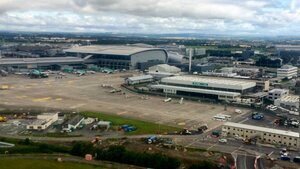 It may not be attracting the attention of the Jobstown case, but judicial activism in environmental campaigning has been increasing.

Recently, the High Court heard an action taken by environmental group Friends of the Irish Environment (FIE) and residents of St. Margaret’s against Fingal County Council and the State over its decision to grant the Dublin Airport Authority an extension of a planning permission to build a second runway at Dublin Airport. This is one of two significant cases underway in the High Court which challenge the State’s role in climate policy.

Senior Counsel for FIE John Kenny BL has argued that

‘there is and should be recognised by this honourable Court as a constitutional right to an environment which is consistent with the bodily integrity, right to life, water, food, and dignity of the Applicants’ members and the citizens at large’.

Kenny argued that key Supreme Court decisions in the infamous McGee and Ryan cases relied upon an interpretation of existing texts to set out new rights under the constitution to bodily integrity and privacy. This is what now needs to be done to guarantee citizens environmental rights.

Counsel for the State robustly denied such unenumerated rights exist in the constitution. Of course these arguments would have been made for the McGee and Ryan cases.

What the State’s arguments show are the challengesfor environmentalists in seeking a constitutional remedy to protect against poor climate governance.

FIE, through its counsel has argued that there is now an emerging jurisprudential, philosophical and theological consensus that climate change represents a serious threat to human well-being. Because of this, shouldn’t the courts act to protect the right to bodily integrity of Irish citizens?

It is the very global nature of the atmospheric commons, and the all pervasive nature of greenhouse gas emissions, that requires a new way of thinking beyond existing statutory environmental protection.

These are not just procedural rights (to information or to public participation): even the Aarhus Convention recognises that those procedural rights are subordinate to the substantive right ‘of every person to live in an environment adequate to his or her health and well-being’

In 2014 the Constitutional Convention recommended further consideration of including environmental rights into the constitution. Introducing the ideas of stewardship, responsibility, and environmental quality and a concern for human well-being and future generations has had a dramatic effect in countries that have incorporated them into constitutions.

Studies have found that countries (Canada and Argentina being two good examples) with constitutional environmental rights actually have smaller ecological footprints, and have better environmental legislation and litigation.

When substantive environmental rights – such as the right to a clean environment – are combined with rights to information and participation, this has tended to improve overall environmental performance, particularly in the case of water services and sanitation.

The effect of codifying such rights could be a greater role for the courts in raising environmental standards and improving the performance of government bodies generally.

Wouldn’t that be nice.