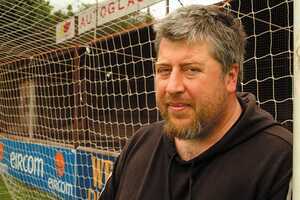 “It’s not a great thing in the current editorial climate for a columnist to lack certainty. Seeing both sides of the issue is a crippling form of paralysis in a environment where the pace is set by bloggers and chat-room tyrants, those lucky creatures who have never felt a second or third thought tugging at their sleeve.”

That was in November 2008. I’m not going to provide the link to the full Locker Room article, but the quote currently sits on a thread on a an old GAA chat forum that hosts over 1500 posts.

The above is being applied as an example of how the established media and their household names treated those of us that populated this now very efficient super-highway from when it was still a scruffy slow-going boreen.

We [those on the chat forums] had our stuff lifted and cogged, while being called names like tyrants and keyboard warriors.

During all those forums, threads and posts, I don’t know of any authentic Chat-Room Comrade that went legal to shut someone up or have commentary removed that did not suit; there was plenty posturing, leg cocking and threats to Moderators, a bitta’ blagguarding at matches here n’there, (like a bucket of slurry traveling from Galway to the CBS Car Park in Thurles) but that was the real fun of those days.

Because nobody was really to know then that there were two victims and 16,000 texts, or that something far more sinister was going on behind the need to use the Irish Times Locker Room to cover his real interest in underage camogie; I’m not going to poke in to it again.

The subject of that particular Locker Room was the second Cork Strike. (The one led by Donal Óg Cusack, and the then GPA by association).

Tom Humphries used the Irish Times, to represent, promote and shout out Donal Óg’s agenda, and wholly on behalf of, and for the benefit of Donal Óg  He took sides, and to add to his denying the primary principle of a Journalist, he was also engaged by Donal Óg in a private sub-contracting capacity as a ghost-writer.

Not his employer, his editor nor a single colleague dared mention his hypocrisy, or question his exposure to conflict and influence, or that as a consequence he has brought their profession into disrepute.

Likewise, from his own peers in the sports writers fraternity specifically the GAA writers; not one dared criticise the Irish Times and their Sports Section referring to non-striking Inter-County hurlers as “Spotty Imposters.” Or even the GPA for refusing membership to these players.

That is a Double Standard that continues today. It’s the blind eye.

Back then there was them, the established Print and Broadcast Media and Us – the t’internet “the pyjama people.”

Actually, I remember an All-Ireland winning Manager calling ‘me’ “a coward and a very depressed individual who must be one of Corks worst losers.” As shur we all thought it was funny at the time. We were the Puck Rockers and getting picked out like that was like cracking a bottle of Champagne off the bow of pirate ship call the Anarchy.

Today we are all steadily balanced between Mainstream Media and Social Media; and the likes of me are no longer the tyrants. But professional scepticism, Independence and transparency has never been more important.

Never before has it become more important to disclose the credentials and possible partialities and self-interests of any commentator or expert presented to the public in either medium or format.

In the era of Fake News and a more dominant ownership controlled media, the citizen has to be advised fully to the ethos and business interests of anyone being presented as an Expert, or presenting themselves as such. That includes paid staff Journalists, pundits and columnists.

There was a notorious blind eye event here on our own doorstep witnessed by those same people and organisations, including us Tyrants, that was allowed off to be forgotten about.

I am talking about a former Ireland Captain and Lions player, who is now to be seen regularly sitting behind a TV studio sports desk or pictured as a correspondent in the print media.

With all due respect to him, his family, his fans, his employers even that ape Hook; the media – be it social or Mainstream, that includes me and all of you, and our hosts here; we simply cannot dare to question a randy, narcissistic Theatre Director for their carry on and leave this and all the others behind and out of the spot light.

That makes us all complicit in the Double Standards and cover ups that take years before there is any contrition or truth realised.

I think there are enough of us that know better than to believe the insincere waffle from RTÉ and Marian [Finucane] and the likes, while pretending to have discussions between sides who clearly have pockets filled with conflicts.

Let’s boycott the papers for not reporting the news in full. Let’s question every single utterance from commentators and experts being put in front of us, and have them empty those pockets of conflicts out in front of us.

Let’s do more than just tell them that our eyes are wide open; lets prove it.

Only then can they all be convinced that they can no longer rely on the Blind Eye that greased their operational and professional Double Standards, and cushioned their failures for all those years.

There can be no friends or an assumed loyalty more important than Truth and Justice.

This is a new World Order lads; Get used to it and get yere houses in order.

27 thoughts on “Nowhere To Hide”