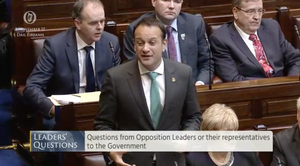 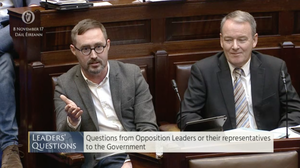 He told how there are many people who earn too much for social housing but cannot afford to rent or buy a decent home.

Among his examples, Mr O’Broin mentioned couples who earn a combined €50,000 or a single working person who earns €35,000 a year.

“I can’t give you a numerical definition of affordable housing. Obviously that depends on, on the individual but I certainly would think that somebody who earns the average income in the State should be able to, to be able to get a mortgage and should be able to purchase a home with that.

“And, obviously, without giving you a numerical definition, I can’t answer the second part of your question.”

“I’m encouraged by the fact that planning permissions are up, that construction is up. I was in my constituency on Monday with Minister Murphy visiting the Hansfield area where over 1,000 houses are under construction – 150 of which are public housing, social housing and about 800-900 are family housing and affordable housing.

“And in my constituency, in that part of my constituency, there are houses that are available for €320,000 and apartments that are available for €220,000. People who are able to secure a 35-year mortgage paying €880 a month which is considerably less than rent for people in lots of parts of the city. So I think we are making real progress in that regard.”

As part of his response, Mr O’Broin said:

“I was hoping you’d mention Hamstead in Fingal. I watched the Twitter clip (above) of you yesterday of you in the hard hat and initially, of course,  I thought it was a Callan’s Kicks satire because there you were stood beside houses and the sale price of those houses that you were stood in front of, Taoiseach, was €315,000 to €395,000.

“It’s above the threshold for social housing and it’s approximately a household average of €75,000.

“So it is absolutely remarkable that we have a Taoiseach that doesn’t even know what the legislative definition of affordable housing is, let alone have one for his own Government, and cannot tell us how many affordable units will be delivered from the €1.1billion of subsidies he’s giving to private developers.”

Mr Varadkar and Mr O’Broin then had the following exchange:

Varadkar: “You are, of course, misinformed, because the houses that were behind me are not for sale. They’re social housing.”

O’Broin: “The houses on the left…for sale. They were right behind you.”

Varadkar: “I think this is getting to the point of triviality but for anyone who’s interested in the facts, there are about 1,000 homes under construction there. It includes social housing which is not for sale. It includes apartments which are specially adapted for people with disabilities. It includes private housing.”

Mr Varadkar went on to claim Sinn Fein, specifically on Dublin City Council, only want “segregation” and social housing-only areas as opposed to mixed areas with different types of housing.

“The reason why Sinn Fein wants that is because they want segregation, they want to divide people so they can brew up discontent.”

Taoiseach tells Dail that someone on the average wage should be able to afford a home.

Bad day for Leo. Doesn't know what an affordable home is. Then claims construction is increasing, yet his housing minister is 8 days late publishing Sept 2017 housing supply stats. The Aug figs suggest activity is declining. pic.twitter.com/DMghMr3UNX