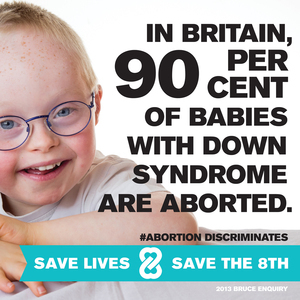 The claim that 90 per cent of babies diagnosed with Down’s Syndrome in Britain are aborted is not inaccurate but it is rather misleading.

What it leaves out is the very large number of women – between 30 and 40 per cent – who choose not to be screened for DS because they have already decided that even if the test were positive they would continue with the pregnancy anyway.

In Holland, only 35 per cent of women choose to be screened. Prof Eva Pajkrt, co-author of a Dutch study, told the Oireachtas committee on the Eighth Amendment:

“We asked women their reasons. One reason was that many women in the Netherlands felt that Down syndrome was not something we should screen for. I think that reflects our way of counselling women and giving them their own choice. Our healthcare is based on patient autonomy and what women want.”

Choice operates both ways – some women choose abortion, some choose to raise a child with DS.

…The choice to continue with a DS pregnancy is made, not in the abstract, but in real life. Anti-abortion campaigners claim that the Eighth Amendment has made Ireland a lovely place to have a DS child.

Love Both’s pamphlet says of DS that “we have a culture of equality and inclusion that we can be proud of”. Senator Rónán Mullen claims, “We have a tradition here in Ireland where children with Down syndrome are perhaps more cherished than in many other countries.”

That would be the DS children who wait two years for a wheelchair or three years for language therapy. That would be Ireland whose grand total of DS clinical nurse specialists is precisely one – and she’s paid by a charity, not by the State.

Child with Down syndrome will be face of anti-abortion campaign (Fintan O’Toole, irish Times)

My opinion on Saving the 8th. Take that abortion lovers pic.twitter.com/oIoZhMeEUF

83 thoughts on “Choice Operates Both Ways”