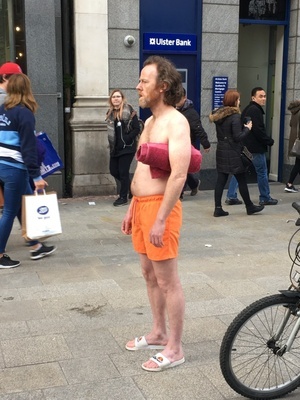 You may remember this chilly scene (top)?

Why is he in his togs on Grafton Street?

Turns out it was a timelapse promo video for Love In The Wild, a new play starring shivering Anto Seery at the Axis theatre, Ballymun [Dublin 11] in March (dates and tickets here.

The play by Lisa Walsh and directed by Peter Sheridan centres around Ger Duffy (Anto), who:

…mostly dreams about Grainne McManus. There is a hole in his heart from the day she disappeared out of his life. That was five years ago, when they were lovers and addicts together.

One day, Grainne’s Da turns up at Ger’s hall door in Ballymun. Ger assumes that she’s dead; that she has become another statistic to heroin. But the news is different and lights the flame of hope in Ger’s heart…

Love In The Wild