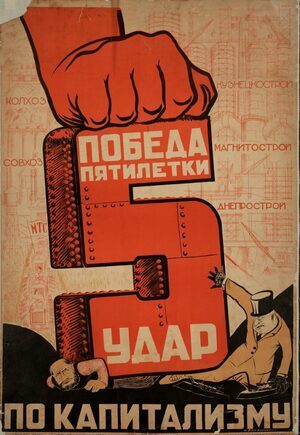 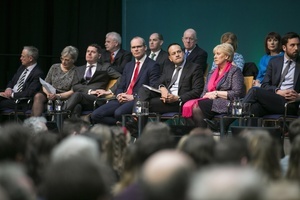 From top: Propoganda for one of the Soviet Union’s Five Year Plans; Cabinet members at the Project Ireland 2040 launch at the Institute of Technology, Sligo last week

The five-year plans of the Bolsheviks were partly designed to deflect criticism from the ruling party. Later Stalin finessed this by simply killing the critics.

To introduce a 20-year development plan as Fine Gael have done is partly genius, since many of the present critics of the party’s policies are likely to be either dead or in nursing homes by the time the 20 years rolls around and everyone is finally permitted to say, “Well, that didn’t work!”

The idea combines early Bolshevik thinking of using the long-term plan to deflect criticism, but by extending the term of the plan it also gives a nod to Stalin’s propensity for silencing criticism, but with a more civilized approach by arranging for the passage of great swaths of time itself to be the executioner of opposing voices.

I know it’s a bit strange to be lumping Fine Gael in with the Bolsheviks, especially given the taoiseach’s contempt for what he calls hard-left politics, but these are strange times and everything is not always as it seems.

Because what Varadkar’s Fine Gael and the Bolsheviks have in common is a propensity to engage in wide-ranging officially sanctioned deceits designed to mislead the public.

In the Bolshevik’s case this was done to ward off a counter-revolution, in the Fine Gael case it is being done simply to ward off criticism that might undermine their hold on power. In Russia it was called censorship, in Fine Gael it’s called “controlling negative narratives”.

But you have only to look at the US to know that while positive thinking economics might be good for certain sectors of the economy, the top 1% for instance, it tends not to be so great or positive for blue-collar workers, most while collars workers, the poor, the destitute and everybody else really who isn’t either a tech billionaire or a movie star.

But whatever the degree of the taoiseach’s sincerity on the subject of positive thinking as a generator of economic recovery, the fact remains that, like the Bolsheviks, Fine Gael are investing public money in a team to control the news and the perception of the government, in order to hold onto power. And like the Bolsheviks are using the concept of a long-term economic plan to deflect criticism.

Varadkar has also to date targeted a minority social group for scapegoat treatment through the welfare cheats campaign, which he personally led, voluntarily making himself the official face of intolerance of the poor in direct contravention of an EU directive which his party have failed to implement: namely, to add discrimination on grounds of socio-economic status as a protection during austerity.

But if this right were implemented, the smirking minister with the welfare cheats sign would be on the wrong side of the law, as would the entire JobPath employment activation programme, which is predicated precisely on discrimination against those on welfare, or the poor, or those of low socio-economic status; something the then minister for social protection, now taoiseach, was fully aware of when he set out to pit low-paid worker against the unemployed, by scapegoating the latter as the cause of high taxation.

The number of artists who were also transferred into the JobPath system could also be viewed as a direct attack on the imagination of the culture, the system essentially degrading artists into a pool of menial labour from which two private companies hoped to profit.

This is not quite the gulags of the Soviet Union, but the results in silencing oppositional viewpoints are very similar, and much easier to defend, since the economic argument can always be raised as a justification for silencing art in the name of recovery.

What joins Fine Gael and the Bolsheviks is naked political power and the willingness to bend laws or neglect their implementation to retain power. The use of the long-term economic plan seals the similarity, despite the politics being, on the face of it, on the opposite sides of the spectrum.

There is little difference between Varadkar’s PR team running paid “advertorials” in the national press in order to combat what it terms “negative narratives”, and the Bolshevik’s all-encompassing control of the news in the soviet states, except in terms of degree.

Both are ultimately concerned with silencing opposition, and both justify repressive actions on the grounds of economic progress.

While Fine Gael’s form of control is not bare-faced censorship, they are quite open about their intention to silence dissent as being merely “negative”, and government control of the main organs of news creates a form of censorship by omission, with the concept of “advertorials” now merely adding to the flavour of a government-controlled Tass-like Agency in our midst.

The Fine Gael party’s secret weapons are “progressive” Varadkar as their public face, and the “religion” of positive thinking, which they hope will be enough to appeal to a majority of the electorate, enough to consolidate their grip on power. The twenty-year plan is perhaps a direct appeal to millennials.

But the wild introduction of that 20-year plan also seems to suggest that Fine Gael are not at all confident of success in the next election, where arguably all their focus truly lays, despite all the bumph of 2040. In other words, Fine Gael appear to be privately entertaining a few negative narratives of their own.

11 thoughts on “Fine Gael And The Bolsheviks”