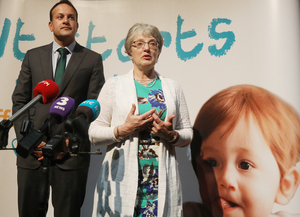 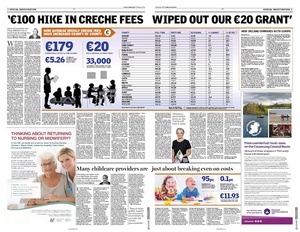 The Sunday Independent devoted three pages to the escalating cost of childcare. This was based on a Departmental document made available to the paper, along with a new Eurostat study and an analysis of childcare affordability from Ciaran Nugent of the Nevin Economic Research Institute. It tells the same story that I canvassed late last year – that rising childcare fees are cancelling out a substantial portion of the new €20 per week subsidy.

I don’t intend to go over the arguments first made in this post written when the new scheme was announced. However, I will restate the main point: as long as childcare services are run on a stand-alone basis – whereby each provider must raise enough money (primarily from parents) to meet their costs – affordability will be elusive.

Any attempts to subsidise the service will lead to fees inflation as services seek to increase investment with the additional payment – as is happening now.

Here I’d like to outline an alternative programme of affordable and quality childcare, working from where we are now. Ideally, childcare services should be a public sector activity as it is in other countries where municipal services play a lead role. However, public sector intervention is not likely in the short-term. We need to work with the 3,700 services currently providing early years’ service.

Each service would be invited to participate in a national network operated by a dedicated public agency. This agency would oversee the quality of each service and provide general operational guidelines, allowing for flexibility so that services can match local needs.

The key incentive to participate in this network is that the agency – funded through the Department of Children and Youth Services – would directly pay employees’ wages and social insurance costs. This could dramatically reduce fees.

According to the detailed 2007 Deloitte study of childcare costs (a bit out of date but the proportion of costs should remain the same), employee compensation makes up 67 percent of childcare expenditure. This shouldn’t be surprising – caring for children is very labour-intensive. If the public agency takes over this cost, this would reduce childcare fees by two thirds.

On average, childcare fees would fall from an average of €179 per week to €58 per week, saving parents €525 per month.

That savings would be a real benefit to families’ living standards, increase women’s participation in the workforce and boost consumer spending in other non-childcare businesses: win, win, win.

Workers in the sector would be able to negotiate collectively with the agency – covering not only their wages, but their working conditions (full-time contracts, up-skilling, pensions, etc.).

In other words, we could start to professionalise the sector.

The cost would not be as much as might be imagined. Using the recent Pobal survey of the Early Child Services sector we find there are 23,000 employees in the sector, half of which are full-time. If we assume 20,000 full-time equivalents (this is probably on the high side but let’s try to find the highest possible cost) at the average hourly pay of €11.93 the cost to the new public agency would be €484 million. If we immediately increased pay by 20 percent across the board, the cost would rise to €580 million.

Though this is just a back-of-an-excel-sheet estimate, the gross cost would replace a significant amount of current expenditure which, in 2016, amounted to approximately €225 million for the full Early Childhood Care and Education programme. The net cost, therefore, would be less. This would still leave Ireland well down the table in public spending compared to other EU countries.

Even if we were to take €580 million as the final cost, we could easily fund this out of the current fiscal space.

The Government projects it will have €10 billion available over the next three years, of which €3.3 billion is earmarked for tax reductions.

The proposed cost would make up less than 18 percent of the proposed tax cuts. Wouldn’t this be a better use of limited resources?

There are a number of issues that would still need to be teased out:

These and other issues would need to be addressed but locating these within a public sector-led national network makes it easier to deal with affordability, quality, supply and access.
We have the need, we have the resources. But the first – and main – decision we need to make is political.