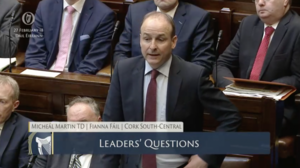 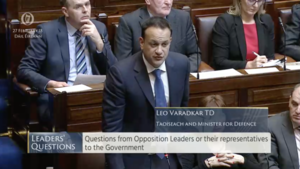 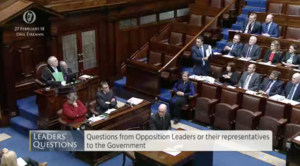 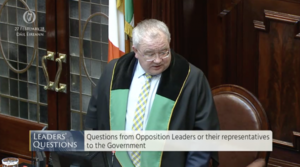 Varadkar told to restrain himself as he struggles to defend his €5m Spin Unit’s propaganda pieces in Newspapers promoting #Ireland2040 #Dail pic.twitter.com/xz0aLXY305

Michael Martin: “The role of the Strategic Communications Unit which you established, whose head [John Colcannon] you selected must come under the closest of scrutiny and most comprehensive of reviews. Because the SCU-directed campaign, in my view, either advertently or inadvertently has politicised elements of the civil service whether we like it or care to admit it or not.

“This campaign represents an abuse of taxpayers’ money, I genuinely believe that.

“That Government advertisements, or funding of the media, should in my view be at arm’s length and not used for party political or party electoral objectives.

“The civil service code in this regard, in my view, as a result of this campaign, has been breached.

“If you read the Longford Leader, the Limerick Leader, the Roscommon Herald, for example, you will see so-called advertisements masquerading as news articles with Fine Gael candidates, prominent in those ads. Not members of Government, in some cases, not even members of the Oireachtas, but Fine Gael election candidates prominent in those advertisements.

“The Sunday World double-spread features [Athlone-based] Senator Gabrielle McFadden with a large emphasis on Athlone. Boxer [Athlone-based Independent junior OPW minister Kevin ‘Boxer’ Moran] gets in but not to the same degree.

“And again, it’s a clear electoral pitch by any yardstick. And if you look at it and this is meant to be an ad informing the public about information around the actual, the national planning framework or the national development plan itself. In essence it’s using taxpayers’ money to advance or promote Fine Gael election candidates.

“And you can see the same trend in other constituencies as well in terms of trying to identify key marginals and so on and promoting issues around those marginals, constituencies.

“We have an independent media, thanks be to god, which is essential to the health of our democracy and speaking truth to power is an essential pre-requisite for that. The media needs revenue and we’ve no difficulty with advertisements that are clearly identified as advertisements.

“Media content partnerships between the Government at the media should be fully transparent so in that context, one local editor told the Times Ireland that, “this is fake news, newspapers are struggling and the Government know that so they’ve got us by the – ” I’m not going to finish for parliamentary decency.

“Regional newspapers were instructed to make Government advertorials to look like independent stories and in some cases part of the normal news cycle. So Taoiseach, some basic questions. Last week you were asked what’s the estimate for the cost of this particular campaign? I would ask you if you could outline to the house how much it has cost and the overall estimate for it is. Do you accept that there’s been a blurring of the lines in how all of this has transpired?

“That it involves a politicisation of the staff in the SCU, the Strategic Communications Unit, and that essentially the entire promotion has been about Fine Gael’s electoral advancement?”

“And that is the case. Your assertion that it’s the most expensive public information campaign run by Government is absolutely not the case. From the records that I have, the most expensive one was one that was run by the Fianna Fail/Green coalition which was the change campaign – around the Government’s Climate Change agenda – that cost €15million. The one around Transport 21 – which was the public information campaign around Transport 21, again which you’ll remember cost €3million.

“It is my view, it is my view, and I’ve said it before and I’ll say it again, that good communications is a virtue. That good communications is a virtue. It’s right and proper that the Government should be able to inform the public, what it’s doing, what is happening, how public money is being spent and how it’s acting in their interest and I often meet people that say to me that ‘the government isn’t communicating right’, it isn’t getting its message across and I believe we need to do more in that field to make sure that people are fully aware of what Government is doing.

“But I also know what you’re doing, deputy. You don’t want people to talk about Project Ireland 2040.

“You don’t want people to talk about the good plan that we’ve published to improve our country, to upgrade our infrastructure in the coming years.

“What we’ve produced is a plan for the next 20 years, backed up by a 10-year infrastructure investment plan, running to €116bn and last week, you didn’t want to talk about it, you wanted to talk about process and procedure, this week you want to talk about the public information campaign.

“You don’t want to hear about the €116bn that’s being invested and this is a government that’s delivering on infrastructure.

“This morning, on the way to work, I passed the paediatric unit, at the Connolly Hospital, which is now in its third storey and within the next couple of weeks, the new Luas trams will arrive, making them longer.

“So what this is about, from your point of view, is pure politics. We produced a plan Project Ireland 2040 – a €116bn plan to invest in and improve our infrastructure, roads, rails, healthcare, housing, transport, all of those really important things.

“The one thing you don’t want to do is actually talk about the issues.”

Micheál Martin: “I asked very straight questions and have been asking them of the Taoiseach for the past three to four months, long before the publication of any national development plan. The strategic communications unit is about the promotion of the Taoiseach’s good self and his party. That is the point. It is unprecedented. There are 15 staff in the unit. I asked the Taoiseach a very simple question about Fine Gael election candidates appearing in Government advertisements paid for by the taxpayer. It is about the ethics of it. Will he, please, answer that question?”

Leo Varadkar: “What is the question?”

Micheál Martin: “It is about time the Taoiseach faced up to that. He has blurred the lines and is going down a dangerous route which has, ultimately, the potential to corrupt our democratic process itself. It is about time he saw that.

Leo Varadkar::The answer to the Deputy’s question is ‘No’. We have already explained how this works. The communications unit entered into media partnerships with media organisations. What happens there is that…

Leo Varadkar: “Those organisations have editorial control over content. Nobody in the unit suggested any particular person should be interviewed and nobody in the unit had any editorial sign off on the articles before they were published. Those were done by the media.”

Leo Varadkar: “It is one thing to be getting a lecture from Fianna Fáil about this sort of thing. I refer to the national development plan advertisement.”

Micheál Martin: “It is an advertisement.”

Timmy Dooley [FF]: “It is an advertisement. It says “commercial feature”.

Leo Varadkar: “It does not say “commercial feature”. It says “public information”.

Leo Varadkar: “What we have is a banner on the top saying “national development plan”, just like we had for Project Ireland 2040.”

Ceann Comhairle: “Time is up.”

Leo Varadkar: “It does not mention the Government of Ireland whatsoever. The first thing is a big feature, an opinion editorial with a picture of Mr Brian Cowen. In the corner, we have a nice little picture of Deputy Micheál Martin…”

Robert Troy [FF]: “It was in the Roscommon newspapers.”

Ceann Comhairle: “The Taoiseach is not in order.”

Leo Varadkar: “…and on the next page we have a picture of Mr. Bertie Ahern. In the one from The Irish Times, it is the same thing again…”

Ceann Comhairle: “Can the Taoiseach restrain himself from…”

Leo Varadkar: “There is another opinion editorial with Mr. Brian Cowen’s picture and an even bigger picture of Deputy Micheál Martin. This is from The Limerick Chronicle.”

Leo Varadkar: “Again, it says “public information” and “national development plan”. There is nothing about the Government of Ireland whatsoever.”

Leo Varadkar: “On the back of this we have an article from the…

Leo Varadkar: “There are quotes from third parties…”

Leo Varadkar: “The Deputy is not in a position to be giving lectures.

Ceann Comhairle: :The rules of the House apply to the Taoiseach and Deputy Micheál Martin equally, so please respect…”

Taoiseach warned about being disruptive in the #Dail after producing these two features from when FF launch their National Development Plan.

Michael Martin had accused him of “blurring the lines” between media and Gov. pic.twitter.com/UuNDG43xOh 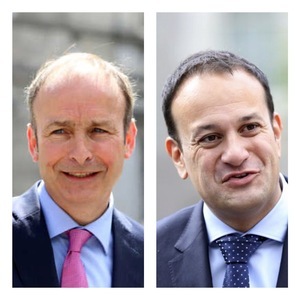 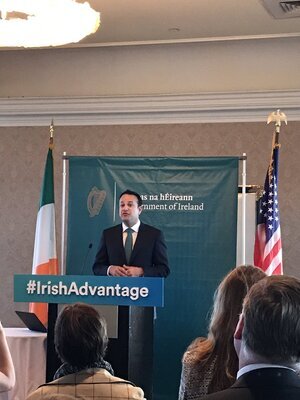 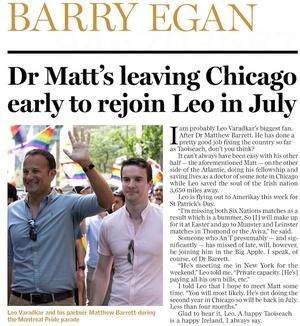 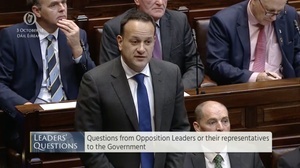