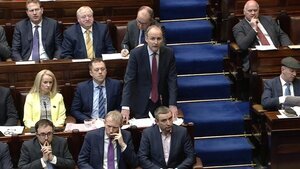 Fianna Fail leader Michaél Martin in the Dáil this afternoon

Leaders Questions in the Dail

Mr Martin said revelations under the Freedom of Information showed how €180 million of advertising revenue would be channelled through the Taoiseach’s office, giving enormous leverage with the media industry…

…Mr Martin said there was a “party political dimension” to the recent advertorials at the centre of the row, adding that four marginal consitituenciues just happened to have Fine Gael candidates “emblazoned across paid ads, paid for by the taxpayer”.

Sinn Féin leader Mary Lou McDonald said that in Budget 2018 the SCU was allocated €5m – one third of the additional money promised for mental health.

She said the SCU is now “mired in scandal” and that the “spin unit has followed a strategy to promote Fine Gael in a very underhand and unprincipled way by directing editors to present paid for political advertising as regular news articles.”