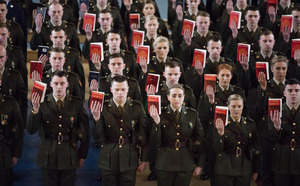 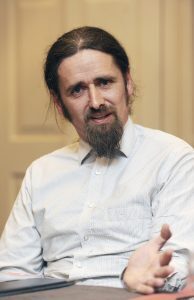 In the last week, EU Defence Ministers, along with Taoiseach Leo Varadkar, met in “PESCO format” [Permanent Structured Cooperation] for the first time.

None of these PESCO initiatives are in Ireland’s interests.

The Treaty on European Union’s description of PESCO is vague, and deliberately so.

It mentions “more binding commitments”, “with a view to the most demanding missions”, to fulfil “the Union level of ambition”, but what exactly is the ambition of the European Union in the use of military force sphere?

We DO know that no matter what the propaganda coming from Fine Gael or what Taoiseach Varadkar says, ‘the most demanding missions’ have nothing to do with UN peacekeeping.

The law establishing PESCO doesn’t contain a single mention of the United Nations, nor does it refer to peacekeeping, nor even “peace”.

We know that in the Lisbon Treaty debates the European Union and the Irish Government actively suppressed discussion of the implications of the Common Security and Defence Policy, including the mutual defence clause which is an integral part of PESCO.

According to Eurobarometer surveys, carried out twice a year among EU citizens, only 12% of European citizens claim to be aware of the mutual defence clause and to know what it is.

This level of ignorance among EU citizens about the EU’s CSDP and PESCO is no accident.

Let’s look at a few facts:

1) This legally binding EU decision mandates PESCO member states to increase defence budgets, to provide troops (on stand-by) for use in EU Battle-Groups , to join “structures partaking in European external action in the military field”, and for “common funding of military CSDP operations and missions”.

2) It states quite bluntly that “Increasing joint and collaborative defence capability development projects, is among the binding commitments under PESCO”.

3) PESCO aims to establish an EU-wide arms industry, and the EU’s European Defence Agency will tell PESCO members, including Ireland, what weapons to buy.

4) International humanitarian law, also known as the laws of war, requires that all attacks be directed at military targets. Attacks cannot cause disproportionate civilian loss.

Yet, we know that in modern warfare, missiles can miss the intended targets up 90% of the time. We also know that for every one soldier killed in modern conflicts, on average, ten civilians die.

The European Union’s own European Security Strategy, adopted by the European Council in Brussels in December 2003, stated as fact that ‘since 1990, almost 4 million people have died in wars, 90% of them civilians’.

A few questions then for our Taoiseach:

1) Will the EU procure weapons including BVR or “beyond visual range” missiles?

2) Will the European Defence Agency publish the “operational pK” (probability of Kill) for the weapons it demands the PESCO member-states buy?

3) Will the Irish government support the purchase of these weapons and against whom will they be used?

4) Mindful that the US military and government pays no attention to civilian deaths in America’s wars, will the EU publish the body count of the civilians inevitably killed through the so-called “alliance of individual PESCO armies” actions in EU CSDP military missions?

The Irish political establishment tells us that PESCO is OK for Ireland to be a member of because ‘non-NATO’ Sweden is a member.

What the Irish establishment won’t say is that Swedish foreign policy is entwined with commercial arms export interests, and that the Swedish Government no longer regards itself as neutral, or even non-allied, and were active participants in the establishment of the NATO ‘no fly zone’ in Libya in 2011 because it wanted to promote sales of its fighter jets.

“(Libya) was quite beneficial to the Gripen. This is something no politician would ever admit, but it’s true. People saw it participating in air campaigns. It’s good for business.“

Ireland should have followed the path of Denmark in relation to PESCO, and secured an opt-out to PESCO and CSDP. As the PESCO law says:

“Denmark does not participate in the elaboration and the implementation of decisions and actions of the Union which have defence implications.Denmark is therefore not bound by this Decision”.

Ireland can have the same legally binding opt out.

The Taoiseach must reverse the decision he took in December 2017 to join PESCO and should instead re-orientate Irish foreign policy to neutrality and to what Ireland and her Defence Forces can do best to tackle conflicts and save civilian lives today, UN peacekeeping.

44 thoughts on ““PESCO Is Not About Peace, It Is Preparation For EU Wars””