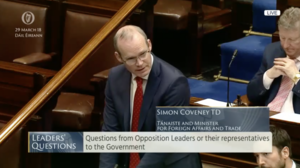 Tanaiste Simon Coveney, taking Leaders’ Questions in which he was asked about homelessness, he said:

“In relation to homelessness, we are making some positive progress. Rough sleepers, for example, are down by 50%..”

“Recent indicators suggest that the number of people sleeping rough is significantly down on what it was last year. The Dublin Region Homeless Executive undertook a count of rough sleepers last night [Tuesday night] and while they have not yet verified all of the data, it appears the numbers are down approximately 50% on the count undertaken last November, when the figure stood at 184.”

Meanwhile, in relation to the count of people sleeping rough on Tuesday night…

Those working on the ground on a nightly basis were not informed of the official count nor were they asked for their expertise regarding the locations of those who are sleeping rough.Remember the night the figure comparisons should be good.#MyNameis#EnoughisEnough https://t.co/ofB4OOhRLK