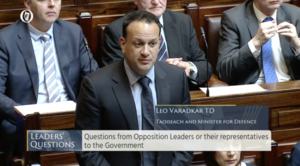 He said the recent events were a “wake-up call” for the Oireachtas to “deal with these issues”.

Mr Martin mentioned a report published last year by Mr Justice John Murray about the protection of journalistic sources, called ‘Review of the law on the retention of an access to communications data’.

Mr Martin said this report hasn’t been acted upon since it was published in April 2017 and called for a national law to be established for source protection.

“Will you reaffirm to the house because I think something happened yesterday, whereby an actor of the State – the Director of the Office Corporate Enforcement was essentially, received correspondence that in line of his duty, he may be peronsally held liable in respect of certain things.

“I think it’s very important that that affirmation should be given in respect of the ODCE director today.”

“Thanks very much, deputy, for raising this important question and to answer yours, I think given recent revelations, yes we are going to have to give consideration to legislation in this area to protect sources.

“I’m not aware of any legislation being drafted currently by Government and I haven’t seen any legislation drafted by Opposition, in the form of private members’ bills in the past two years but perhaps, perhaps time has certainly come for Government to dust down those reports and give consideration to legislation in this area.

“I think having an Independent News and Media is a cornerstone to our democracy, it is after all the fourth estate.

“I believe journalists must be free to pursue stories that they want to pursue. Their sources should be protected, free from any unjust interference, external or internal.

“We need to the plurality of voices in the media. We need to ensure that these voices are not drowned our or silenced and we also need diversity and ownership. So I commend journalists who work to report on this story, including journalists at Independent News and Media who haven’t allowed their independence to be compromised.

“A report of the data breach represent a significant a very significant threat to the freedom of our press, however I think that the way that the media has responded to this threat to date should reassure us that our press will not be silenced.

“Obviously, any alleged breach of personal data is a matter of concern, heather it relates to journalists or public citizens and it’s important to say that although this is now a matter before the courts, we need to respect that and bear in mind that in terms of our contributions and I know the deputy has.

“The Office of the Director of Corporate Enforcement, the ODCE, which is a Government office at the Department of Business has now made an application to the high court under Section 748 of the Companiess Act 2014 to appoint inspectors to investigate the affairs of INM.

“This is now an enforcement matter for the ODCE. Section 949, subsection 3 of the Companies Act, provides that the Director of Corporate Enforcement shall be independent in the performance of its statutory functions.

“That case commenced as of yesterday.

“In terms of indemnity, it is absolutely the case that any public servant that acts properly, and acts in accordance with their mandate, and doesn’t breach any law or ethical principles is of course indemnified by the State.” 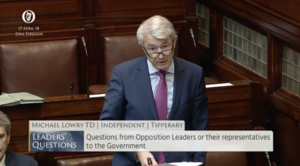 “Sorry to trouble you with more mundane and practical matters but some of you city representatives and urban centres wouldn’t recognise or realise the huge problem, the massive problem we have in relation to rural and county roads…”

The Mystery Of The Endless Summer