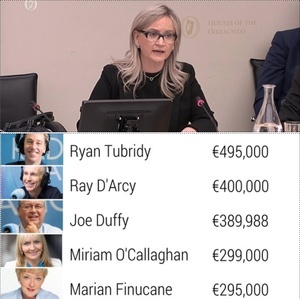 Ms Forbes told TDs that RTÉ currently has “inadequate resources” and seen a drop of more than €100m in the annual funds available to it between the years 2008 and 2016.

Social Democrats TD Catherine Murphy said the list of top 10 earners gave “the impression that RTÉ has shedloads of money” adding that it was difficult to argue that RTÉ was “short of money”.

Ms Forbes defended the sums paid, saying it was 1pc of RTÉ’s total cost base. She pointed out that it was incumbent on presenters to ensure strong audiences in order to be attractive to advertisers.