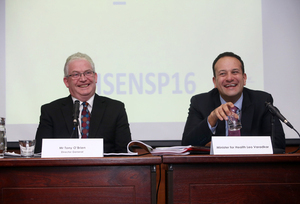 Fianna Fáil leader Micheál Martin, speaking on RTÉ Radio One’s Morning Ireland earlier, speculated that Mr Varadkar, while Minister of Health in 2016, must have been privy the briefing notes, including one from March of that year outlining a ‘communication strategy’ for the media.

The Department of Health said no health ministers had seen those memos.

Audrey Carville: “Do you believe that the Minister for health at the time, March 2016. Leo Varadkar did not see this memo?

Carville: “Is that credible?”

The grovelling letter sent to disgraced #HSE boss Tony O’Brien @dghealthservice from @campaignforleo on ‘behalf of the people of Ireland’ with a handwritten note requesting his service after retirement despite the countless scandals he has presided over in #HSE #CervicalCheck pic.twitter.com/2lb5zRvuqz

When I appear in public – say at a Committee I conduct myself against a simple standard. Would I be happy for my children or my mother to see how I behave? I sometimes look across the room and hope their children will never see and hear how they behave.

Over The Rainbow, Way Up High

‘We Put The Eighth Into The Constitution Without Considering It Properly’