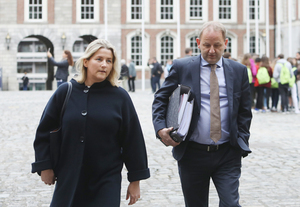 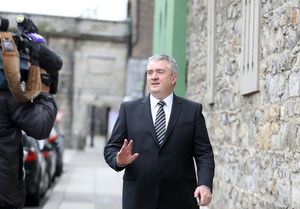 The Disclosures Tribunal will hear from Supt Dave Taylor.

Supt Taylor – who was head of the Garda Press Office from July 2012 until June 2014 – is scheduled to give evidence for the next three days.

After that, it’s understood a number of journalists are scheduled to give evidence.

The tribunal is examining claims made by Supt Taylor that he was instructed by former Garda Commissioner Martin Callinan, with the knowledge of Deputy Commissioner Noirin O’Sullivan, to negatively brief journalists about Garda whistleblower Sgt Maurice McCabe.

He’s also since told the tribunal that the director of communications Andrew McLindon – who took up his role in September 2013 – was also aware of what was allegedly happening.

The tribunal has already heard Supt Taylor claimed in his disclosure that he was directed to draw journalists’ attention to a complaint of sexual assault made against Sgt McCabe in 2006 by the daughter of a Garda colleague, known as Ms D – which the DPP found had no foundation in April 2007 – to the effect that this was the “root cause” of Sgt McCabe’s complaints about malpractice within An Garda Siochana.

The tribunal’s chairman Supreme Court judge Peter Charleton has already told the tribunal that Supt Taylor has “softened” his position towards Ms O’Sullivan over the course of three statements he has made to the tribunal since he made his protected disclosure on September 30, 2016.

The tribunal hasn’t heard specific details of this “softening”.

This, the tribunal has heard, came on foot of a discussion he had with Supt Taylor, and his wife Michelle, at the couple’s home on September 20, 2016.

In his evidence to the tribunal, Sgt McCabe said Supt Taylor was upset and told him he had recently spoken to a spiritual person and that he felt he had to confess to Sgt McCabe that he “destroyed” him.

Sgt McCabe told Judge Charleton that Supt Taylor said there had been an orchestrated campaign – ordered by the then Garda Commissioner Martin Callinan – to attack Sgt McCabe and the campaign was in the form of whispering, phone calls and text messages.

Sgt McCabe also said Supt Taylor told him that Mr Callinan always wrote the texts and that Supt Taylor was told to send them on to journalists, other senior gardai, and a number of TDs.

Sgt McCabe said Supt Taylor also told him that he would send one of these texts to Ms O’Sullivan.

Sgt McCabe said Supt Taylor told him he would have sent hundreds of text messages, if not thousands, and that he referred to Ms O’Sullivan as the “pusher”.

After Sgt McCabe gave his evidence, Tara Burns BL, for Supt Taylor, told the tribunal it’s Supt Taylor’s position that when he referred to ‘pusher’, he was telling Sgt McCabe that Ms O’Sullivan was pursuing a prosecution against him [Supt Taylor].

Sgt McCabe did not agree.

Ms Burns also contended that Supt Taylor never said Mr Callinan composed any texts and that he didn’t say he sent hundreds of texts relating to the alleged smear campaign or Ms D allegation but, instead, he sent text messages informing the recipients about any media reports concerning Sgt McCabe.

Sgt McCabe didn’t agree with these claims either.

It’s likely Supt Taylor will be asked what exactly he claims to have told journalists about Sgt McCabe, which journalists he told and when/how did he tell them.

It’s likely he’ll be asked about the run-up to the Public Accounts Committee meeting on Thursday, January 23, 2014 – in which the then Garda Commissioner Noirin O’Sullivan made his infamous “disgusting” remark” – and events of that day.

The tribunal has already heard that prior to this meeting there were a number of “pre-PAC” meetings to prepare for Mr Callinan’s appearance and that notes from these meetings show Sgt McCabe and the Ms D allegation were discussed.

Although RTE journalist and former Crimecall presenter Philip Boucher Hayes has yet to give evidence, the tribunal’s opening statement has already outlined Mr Hayes has told the tribunal, on December 17, 2013, in RTE, Mr Hayes had a private conversation with Mr Callinan in which Mr Callinan told him Sgt McCabe was not to be trusted and that he was a “troubled individual” with a “lot of psychological issues and psychiatric issues”.

This came about, according to Mr Hayes, after a row broke out between the gardai and the producers of Crimecall over whether they could ask Mr Callinan about the penalty points controversy at the time.

Mr Boucher Hayes claims Mr Callinan told him Sgt McCabe was famous in An Garda Siochana for a set of grievances he had against Garda management and that there were other things he could tell Mr Boucher Hayes about him – “horrific things, the worst kind of thing” – but he didn’t elaborate further.

The journalist also alleges that Mr Callinan told him that if he wanted to know about Sgt McCabe or the penalty points issue, to contact Supt Dave Taylor.

Mr Boucher Hayes claims, after this, Supt Taylor immediately “buttonholed” him and said: “Now do you understand what the problem with Maurice McCabe and the penalty points is?”

When Mr McLindon gave evidence, he told the tribunal he couldn’t recall penalty points ever having been raised by Mr Hayes that day but did say he saw the two men speak privately.

The tribunal has also already heard that Supt Taylor claims he heard Mr Callinan refer to Sgt McCabe as a “kiddie fiddler” to Fianna Fail TD John McGuinness after the meeting of the Public Accounts Committee on January 23, 2014.

Fine Gael TD John Deasy has told the tribunal that on the way to the same PAC meeting he had a brief conversation with Mr Callinan and that Mr Callinan told him Sgt McCabe was not to be believed or trusted with anything.

The Comptroller and Auditor General Seamus McCarthy – whose report into the quashing of penalty points was being discussed at that PAC meeting – has also told the tribunal that, on the same day, Mr Callinan told him Sgt McCabe was not to be trusted, that he had questions to answer, and that there were allegations of sexual offences against him.

Mr Callinan denies all these claims.

It’s also expected that Supt Taylor will be asked about his knowledge of the so-called carpark meeting at Bewley’s Hotel on the Naas Road, between Mr Callinan and Fianna Fail TD John McGuinness on Friday, January 24, 2014, during which Mr Callinan allegedly told Mr McGuinness Sgt McCabe sexually abused his children and nieces.

Supt Taylor will also likely be asked about his involvement, if any, in the briefing of solicitor Gerald Kean before he went on RTE’s Marian Finucane Show.

During the show, Mr Kean emphatically, and repeatedly, alleged that Sgt McCabe and former Garda John Wilson didn’t cooperate with an internal Garda investigation into the quashing of penalty points by Assistant Commissioner John O’Mahoney in 2013.

Sgt McCabe and Mr Wilson later sued over the comments.

In relation to the Garda phones used by Supt Taylor during his time in the Garda Press Office, the tribunal has already heard that he had the use of three phones during that period – from July 2012 to June 2014 – but none of these have been surrendered to the tribunal.

However, it’s understood billing records from these phones should be available.

The tribunal has also heard details of three phones seized from Supt Taylor – in December 2014, February 2015 and May 2015, during the course of the investigation into leaks.

During this time period, Supt Taylor was not working in the Garda Press Office.

After Ms O’Sullivan took over as Garda Commissioner, following Mr Callinan’s resignation in March 2014, Supt Taylor was transferred to the Traffic Department and, from June 2014, he was there until he was suspended and arrested in May 2015 for allegedly leaking material to journalists.

He didn’t return to work in the Traffic Department until February 14, 2017 – the day after the DPP ruled there was to be no prosecution for a second time with the previous similar ruling having been made in February 2016.

As mentioned above, Supt Taylor told Sgt McCabe about the alleged smear campaign in September 2016.

Chief Supt Clerkin explained his criminal investigation into Supt Taylor was prompted by communications he discovered Supt Taylor had with journalists while he was separately investigating leaks to the media concerning two Roma children in October 2013.

In early or mid-December 2014, CS Clerkin obtained phone billing records – which An Garda Siochana can obtain as they pay for the phones.

CS Clerkin said the billing records also showed that Supt Taylor, while he was in Traffic, had 11,000 communications with journalists between September 2014 and December 2014 – a quarter (2,800) of which were with Eavan Murray, of the Irish Sun; while 190 were with John Mooney, of the Sunday Times, and 17 were with Juno McEnroe, of the Irish Examiner.

CS Clerkin has told the tribunal that when he seized Supt Taylor’s phone (SM3) on December 18, 2014, he sealed it and gave it to Det Supt McGowan with a view to examining it later.

CS Clerkin said the investigating team had hoped to see texts going back to October 2013 – when Supt Taylor was in the Garda Press Office and when the incident with the Roma children occurred – but no such information was on the phone as it had only been issued to Supt Taylor in September 2014 and Supt Taylor had taken the old (2013) phone away with him at that time.

After learning that Supt Taylor had been requesting information about incidents from other gardai, CS Clerkin said he seized Supt Taylor’s second phone (SM2) on February 19, 2015. He also had his laptop (SM5) also seized on this day.

He was later arrested in May 2015 and, the tribunal heard that, other than confirming his name, mobile number and email address, Supt Taylor replied ‘no comment’ for the duration of six interviews and being in custody for up to 18 hours.

It was around this time his third phone (SM4) was surrendered to CS Clerkin.

A file went to the DPP on August 4, 2015 and CS Clerkin recommended that he be prosecuted for disclosing information to numerous journalists between October 21, 2013 and February 19, 2015, contrary to Section 62(2) of the Garda Síochána Act 2005.

On February 17, 2016, the DPP recommended no prosecution. The DPP said:

“While highly suspicious, I do not think that it is possible to prove beyond reasonable doubt that the suspect disclosed confidential information. Therefore, I direct no prosecution.”

The gardai then asked a second time if the DPP would reconsider a prosecution against Supt Taylor in relation to disclosing personal data without the prior authority of the Data Controller.

This lead to a final direction being given by the DPP on February 13, 2017.

Supt Taylor went back to work the following day, February 14, 2017.

Neither Ms McCann nor Ms Murray wrote about Ms D.

It’s also likely that Supt Taylor will also be asked his contact with Paul Williams, of the Irish Independent, who interviewed and did a video interview with Ms D in Marc h 2014 and subsequently wrote four articles about her in April and May 2014.

Meanwhile, Sgt McCabe has also told the tribunal that Supt Taylor told him Supt Noel Cunningham told him [Taylor] that Ms O’Sullivan was after “throwing me under a bus” when she referred a claim presented at the O’Higgins Commission of Investigation – which pertained to Supt Cunningham and another sergeant and their famous Mullingar meeting with Sgt McCabe in August 2008 – to GSOC in May 2016.

Ms O’Sullivan referred the matter to GSOC even though, at the same time, she told the tribunal she understood the matter to have just been a mistake.

Judge Charleton specifically said the decision to send the matter to GSOC – given it was understood to be an error – “..is something that I won’t understand until my dying day”.

The tribunal begins this morning at 11am.