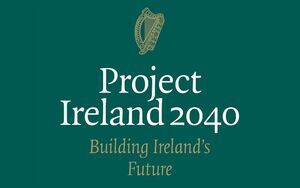 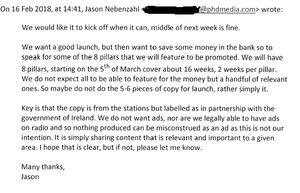 On – the day of the referendum on the Eighth Amendment – the Department of An Taoiseach released to a number of journalists records they had requested under Freedom of Information laws in relation to the Strategic Communications Unit advertorial controversy.

The head of the advertising agency promoting the government’s national development plan (NDP) said he did not want promotions for the project on radio to appear as advertising for “legal” reasons.

In correspondence released after a freedom of information request, Jason Nebenzahl, managing director of PHD Media, told ad bookers it was “key” that the scripts used in radio promotions for the Project Ireland 2040 plan came from the radio stations, “but [are] labelled in partnership with the government of Ireland”.

“We do not want ads, nor are we legally able to have ads on radio, so nothing produced can be misconstrued as an ad as this is not our intention,” wrote Nebenzahl in an email on February 16 to Urban Media, which was arranging the promotions with local stations. “It is simply sharing content that is relevant and important to a given area.”

The radio spots were pulled after it was revealed by The Times Ireland edition that Mediaforce, an agency retained by PHD to book local-newspaper adverts, had told them not to label the Project Ireland 2040 adverts as “advertorial”. Mediaforce also instructed that the adverts should fit in with the “tone” of normal coverage.

…The department did not respond to questions about how broadcasting promotions for Project Ireland 2040 could ever be illegal.

…Other documents released show that a sentiment analysis was carried out by PHD. It said when the emotion of users who interacted with the online content promoting the national plan was examined, “an overwhelming sense of joy was perceived”.

6 thoughts on “‘Nothing Produced Can Be Misconstrued As An Ad’”