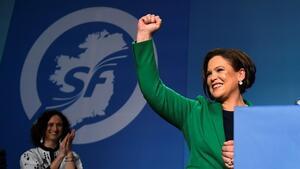 There have been a few Fr Ted references here over the past few days, so let’s start off with another one. Remember that episode of Fr Ted where the lads need to raise money to fix the water leaks in the parochial house?

You know the one, they destroy the car Bishop Brennan gives them for the raffle and thus have to rig the draw to ensure that Dougal’s ticket wins it. Ted gets Fr Billy “SpinMaster” O’Dwyer to do the disco before the draw, but there’s a problem.

Fr Billy has only one record with him and it’s “Ghost Town” by The Specials. Undeterred, the Spinmaster plays it over and over and over again, oblivious to the fact that the crowd have stopped listening.

I like Ghost Town. Not only is it a good song, it is a serious piece of popular social commentary, but even the loyalist Special fan would concede that forcing anyone to listen to it over and over again could turn them against it.

This is something that Sinn Féin’s “spinmasters” Mary Lou MacDonald and Michelle O’Neill could do well to bear in mind.

But the more they go on playing and replaying it, the more they risk turning people against a really fine tune that should be heard by a wider audience.

If we have learned nothing else from the referendums held on these two islands over the past three years, we have surely learned that they only succeed when you prepare for them.

The lesson of Brexit is that you do not ask people a confused and confusing question about which a full and detailed discussion has not taken place.

In Brexit, the British held the vote first and then spent the past two years debating and analysing what it was they voted-on and agreed.

They went into the vote at a time when there was plenty of polling warning that people were not just ill-informed about the benefits of Britain’s EU membership they were startlingly misinformed about them.

A 2016 Ipsos MORI survey, conducted three months before the Brexit vote, showed, among other things, that British people wrongly thought there were three times as many EU immigrants in the UK than there really are.

Jump forward to just last week and you find a poll conducted for Queens University Belfast that shows just 21.1% of Northerners absolutely ready to vote for Irish unity post Brexit.

That is nowhere near the figure required, though the situation is not quite so bleak as the same poll found support for remaining in the United Kingdom at only 50.3%. Even so, it is hardly a great starting point from which to launch a unity/border poll.

Meanwhile, 69% of Northern Irish voters would favour remaining in the EU if there was another Brexit vote. Up from 56% in June 2016.

So, what is the point of Sinn Féin proposing a Border Poll now? Even if we were to have one – and it is not in Sinn Féin’s gift to grant – it would clearly fail. Both sides would divide further and then retrench.

Where does that get us?

Would we not be better focusing on an issue where the majority of Northern Irish voters have common cause with vast majority of Southern voters, in opposing Brexit?

As former Taoiseach Bertie Ahern said at the Oireachtas Committee on Brexit just over a year ago:

“…the last thing I want to see as a result of Brexit is any talk of border polls… Having a sectarian or political headcount is the last thing that we should do. Yes, there should be the provisions for reunification for the future…

…There will be a time for it, and we should all work as hard as possible to get to that time and convince people and win them over, but do not insert the issue into this debate.”

As I have set out here many times since the June 2016 vote, Brexit changes the political dynamic on this island and changes relationships between these islands – that includes relationships within the United Kingdom, not least between Edinburgh and London.

Re-unification is on the agenda, but so far it is primarily on the nationalist side. As the SDLP’s Colum Eastwood has stressed, if we take this calmly and constructively we have the scope to give it a much broader reach, offering not only Unity but also a return to the European Union for the majority in the North who want it.

None of this is new.

“Ireland is too small a country not to be seriously handicapped in its economic development by its division into two areas separated by a customs barrier.”

These are the words of Taoiseach, Sean Lemass TD at the Oxford Union on October 15th, 1959. His speech, entitled One Nation, was part of debate on Irish reunification. In that speech he described as “eminently practical” the idea that

“…Irish reunification could be considered on the basis of an arrangement under which the Parliament and Government of Northern Ireland would continue to function with their present powers, while an all-Ireland Parliament would exercise the powers in relation to that area now exercised at Westminster.”

In other words, Stormont would continue. In saying this Lemass was just repeating what De Valera had stated many times since 1921.

This is something that, six or seven decades later, Mary Lou and Michelle’s Sinn Féin is still unsure about. Its 2016 policy paper: Towards-a-United-Ireland says unity “…could mean:-continued devolution to Stormont and a power-sharing Executive in the North within an all-Ireland structure”

This “could” is offered alongside a “may” in the suggestion that:

A new, united Ireland may require constitutional safeguards and protections for the political identity of unionists who must be assured of their place and political influence in any new dispensation.

It surely will, at a minimum. The policy paper is worth reading as it does attempt to list the possible benefits and advantages of re-unification – and there are many. Where it fails is that it doesn’t go much beyond that.

Though the document looks weighty, with lots of pictures and nifty design work, the text itself won’t take you long to read: at under 4700 words it isn’t even four times the length of what I am writing.

Demanding a unity poll every other Sunday demonstrates none of these.

Reunification is too important an aspiration to be reduced to a slogan or a logo.

The Brexit being pursued by Johnson, Gove, Rees-Mogg and Farage has made unity an idea whose moment has been brought forward, let’s not destroy that advance by having our own Brexit style ‘vote first, plan later’ fiasco.

Though I know your others records are badly scratched, damaged and warped, for the sake of the rest of us who really like this one, you gotta change this record, Mary Lou.