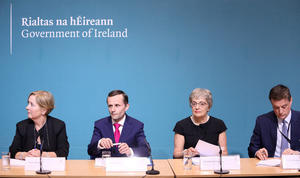 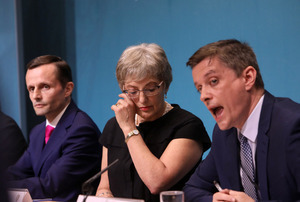 Top from left: Professor Geoffrey Shannon, Special Rapporteur on Child Protection, Minister for Children and Youth Affairs Katherine Zappone, Cormac Quinlan, Director of Transformation and Policy, at a news conference in Government Buildings today about the 126 cases where births were incorrectly registered between 1946 and 1969.

Minister for Children Katherine Zappone said that following an initial examination of around 13,500 records from St Patrick’s Guild, Tusla was able to identify the incorrect registrations because, unusually, there was a marker specifying “adopted from birth” on the record.

The minister said further cases may emerge and in some of the 129 cases these people may not know they were adopted.

She said there is no record for 79 of them ever contacting the adoption society, while 31 were in contact but may not be fully aware of the illegal registration.

Tusla will now contact people in the 126 cases according to the minister because “people have a right to know who they are”.

Via The Coalition of Mother And Baby home Survivors (CMABS):

Once again, this is just the tip of a very large iceberg of fraud, forgery, baby trafficking, child abduction and criminal activity by rogue Irish adoption agencies who have destroyed tens of thousands of innocent peoples’ lives.

It’s important to note that the Government has known all about this for more than 20 years when Alan Shatter and Francis Fitzgerald as opposition TDs, in the Dáil, made detailed speeches about illegal practices in adoption agencies and named Saint Patrick’s Guild.

Shatter and Fitzgerald both went on to become Ministers for Justice and yet never lifted a finger while in office. Francis Fitzgerald was also a former social worker and Minister for Children with direct responsibility for these matters, and yet did nothing in office despite constant demands to take urgent action.

It is also important to note that the adoption community has been calling for an audit of Saint Patrick’s Guild files, and other agencies, for over 20 years.

Government after government have willfully ignored such calls while adoptees have died by the thousands.

Perhaps the most vital issue here is that illegally adopted people have spent generations going to their Doctors and hospitals and unknowingly giving false – and potentially lethal – family medical histories that do not in fact relate to them. Illegal adoptees carry on this practice for their children and even their grandchildren.

Theresa Hiney who founded the ‘Adopted Illegally Ireland’ group in 2008, has been a voice in the wilderness loudly demanding immediate action for more than 10 years and has been ignored by officialdom who are terrified of what audits of the adoption agencies will reveal.

Clare Daly T. has tackled successive Governments on these issues in the Dáil since 2012 and has been rebuffed and sneered at by a one Minister after another who have refused to take action.

Daly has been proved the only TD who could see the injustice and campaigned with the adoption and survivor communities while everyone else ran and hid.

The survivor and adoptee communities demand IMMEDIATE ACTION to tackle this issue. Theresa Hiney, ‘Adopted Illegally Ireland’, and the ‘Coalition of Mother And Baby homes Survivors’ renew our years old joint call for a dedicated unit made up of civil servants, Gardai and social workers, to actively investigate this matter and inform illegal adoptees of their status.

CMABS notes the Gardai have been sent in. A through, well resourced, and full criminal investigation needs to follow as a matter of urgency.”

38 thoughts on “‘People May Not Know They Were Adopted’”