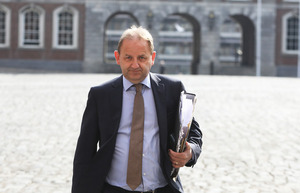 Last Friday, at the Disclosures Tribunal which is examining allegations of a smear campaign against Sgt Maurice McCabe….

He said he felt the two journalists were telling him to ‘cop himself on’ and to ‘not take Sgt McCabe at face value’.

He also said they encouraged him to go and talk to gardai “up there” (Mr Kenny took this to mean gardai in Cavan/Monaghan). Mr Kenny said they didn’t name any specific people with whom he should discuss the matter.

Mr Kenny said the two journalists – whom he said he took very seriously – definitely did not indicate that the child sex abuse allegation was something from the past which had been dismissed by the DPP.

“…I took it very seriously coming from them. They were respected, you know, journalists and have done very good work.”

The tribunal is examining a claim by the former head of the Garda Press Office Supt Dave Taylor that he was instructed by former Garda Commissioner Martin Callinan – with the knowledge of Mr Callinan’s successor Nóirín O’Sullivan – to negatively brief journalists about Sgt McCabe by telling them about an allegation made against Sgt McCabe in 2006.

In December 2006, the daughter of a Garda colleague of Sgt McCabe’s, referred to as Ms D, made an allegation of ‘dry humping’ against Sgt McCabe to gardai.

She claimed this occurred during a game of hide and seek in 1998, when she was around six.

When the complaint was made, in December 2006, it was 11 months after Ms D’s father was disciplined for arriving at the scene of a suicide drunk and whom Sgt McCabe told to leave the scene.

The tribunal has heard Ms D made her statement to the gardai on December 4, 2006, after her father and mother made contact with a detective sergeant in Cavan first and outlined Ms D’s allegation.

The matter was investigated by then Inspector Noel Cunningham, his investigation went to the DPP and, in April 2007, the DPP unequivocally ruled there was no basis for a prosecution.

On August 15, 2013, Tusla social work team leader Keara McGlone wrote to Mr Cunningham and requested a meeting with him to discuss his 2006 investigation.

In her letter, Ms McGlone – who married a garda based in Monaghan Garda Station in 2015 and who told the tribunal she was liaising with members of An Garda Síochána from 2010 – explained she was doing this because nobody from the HSE had met with Sgt McCabe in 2006.

“I would like to meet with you to discuss the case prior to making any contact with the alleged perpetrator.”

But Mr Cunningham never responded to this letter and the HSE never contacted Sgt McCabe.

And the false rape referral wound up in the then Garda Commissioner Nóirín O’Sullivan’s office in May 2014 where it remained until the start of the tribunal – with Sgt McCabe only being notified of the matter in January 2016.

In February 2017, Sgt McCabe issued a press statement saying that if this meeting between Ms McGlone and Mr Cunningham had occurred, “the falsity of the rape offence allegation would have been immediately apparent to Superintendent Cunningham and the claimed error would have been discovered immediately”.

Supt Taylor alleges that he was instructed to tell journalists about Ms D’s 2006 allegation and to tell them that, while the DPP ruled against a prosecution, the investigation was still the “root cause” of Sgt McCabe’s complaints about malpractice within An Garda Siochana.

Supt Taylor – and Martin Callinan – have both told the tribunal they didn’t know anything about the false rape referral which journeyed between An Garda Siochana and Tusla until it came into the public domain in February 2017.

In the tribunal last week, Mr Kenny was asked if he’d like to name the journalists and, after a pause, Mr Kenny told Judge Peter Charleton: “I’d rather they name themselves.”

Mr Kenny also told the tribunal on Friday that a number of weeks ago he received a phone call from another security correspondent asking him if he was going to name names at the tribunal.

Mr Kenny explained the context with which he ended up speaking to the two journalists in January 2014, which, incidentally, was the same month Fianna Fail TD John McGuinness and Comptroller and Auditor General Seamus McCarthy claim they were led to believe by the then Garda Commissioner Martin Callinan that there was an ongoing child sex abuse investigation into Sgt McCabe – claims Mr Callinan denies.

Mr Kenny explained that, in 2013, he started to write about Sgt McCabe with his first article about Sgt McCabe and former Garda John Wilson [though unnamed] and the penalty points controversy published on April 7, 2013.

Mr Kenny explained how he was very interested in the missing computer belong to Fr Michael Molloy, from Kill in Cootehill, Co Cavan, who was jailed in 2009 for defilement of children and possession of child pornography.

Two years before his conviction, in 2007, Fr Michael Molloy’s computer was seized from his home on the same day he was arrested.

Almost a year after he was jailed, in November 2010, Bishop of Kilmore Leo O’Reilly wrote to Cootehill Garda station requested the computer be located and returned to him as a matter of urgency. He said there were valuable parish records on it.

But the computer was lost.

During a formal disciplinary interview, over the missing computer, Sgt McCabe explained he had nothing to do with the investigation of Fr Molloy and that he never had the computer in his possession.

The disciplinary process against Sgt McCabe eventually ended in August 2013 with a report concluding “finding Sergeant McCabe to be in breach of discipline in this case would be unsafe”.

The matter of the missing computer was later examined at the O’Higgins Commission of Investigation in 2015, in which Judge Kevin O’Higgins found it was “difficult to understand” why Sgt McCabe was the only person subjected to disciplinary proceedings, despite having not been involved in the case.

Judge O’Higgins said he was “quite rightly exonerated”.

Mr Kenny took a keen interest in trying to ascertain what happened the missing computer – and also started to ask why security correspondents weren’t making inquiries about it or reporting on it.

In October 2013, he started writing about the matter in the Sunday Independent.

He said it was in the context of this that, in early 2014, he approached the two aforementioned journalists and, similar to what Mr Callinan is alleged to have led Mr McCarthy and Mr McGuiness to believe, they told him Sgt McCabe was being investigated for child abuse.

After his conversation with the two security correspondents, Mr Kenny went to Sgt McCabe and Sgt McCabe told him about the Ms D matter. Mr Kenny then satisfied himself that the matter was wholly untrue.

The tribunal has seen that a letter from the DPP’s office to the then State solicitor for Cavan Rory Hayden on April 5, 2007, in relation to Ms D’s complaint, stated:

I acknowledge receipt of your letter dated 1st March 2007 together with copy investigation file. I agree with you and the Guards that the evidence does not warrant a prosecution. There are no admissions, the incident as described by the injured party is vague. It appears that it was only when she was eleven/twelve that she decided that whatever occurred was sexual in nature. Even if there wasn’t a doubt over her credibility, the incident that she describes does not constitute a sexual assault or indeed an assault. Further, the account given to her cousin [blank] differs in a number of respects to that given to her parents and the Guards. There is no basis for a prosecution.”

The tribunal has heard that Sgt McCabe was told by Mr Hayden of this result on the day it was released in April 2007. While Sgt McCabe took a note of it, he never physically saw a copy of it until the tribunal.

Mr Kenny explained that it was “easy” to ascertain what the DPP’s directions were in relation to the Ms D allegation against Sgt McCabe from 2006.

And he said that any journalist who was told of child abuse rumours about Sgt McCabe at that time had an ethical responsibility to contact Sgt McCabe and put the rumour to him.

The tribunal has already heard that the only journalist and newspaper to write about the Ms D allegation which was circulating around media and political circles in early 2014 was Paul Williams, of the Irish Independent – and he never contacted Sgt McCabe before four articles by him were published between April 12, 2014 and May 3, 2014.

Neither Ms D nor Sgt McCabe were identified in the articles but the tribunal has heard from several witnesses that they knew they were about Sgt McCabe – including Sgt McCabe himself who was contacted by various people on foot of them.

Asked if he usually puts allegations made about a person to the person at the centre of the allegation, Mr Williams told the tribunal he would if they are identified.

When Mr Williams gave evidence to the tribunal last summer, he said that the then head of the Garda Press Office Dave Taylor simply told him that the DPP ruled against a prosecution.

When the contents of the DPP’s letter to Mr Hayden were put to him, Mr Williams conceded that, had he seen that, he would have taken a different view of matters.

When Mr Williams gave evidence, he had the following exchange with Michael McDowell SC, for Sgt McCabe:

McDowell: “When you published it, it was legalled, was it not?”

McDowell: “Were you asked whether you’d ever put any of this material to the man about whom you were writing?”

However, it’s worth nothing that Sgt McCabe and the fact directions by the DPP had been made in relation to him were reported by an INM publication before Mr Williams even met Ms D.

On March 2, 2014, Mr Kenny, in an article primarily about Fr Molloy’s missing computer and the disciplinary proceedings levelled against Sgt McCabe, wrote:

“It is understood that Sgt McCabe has also been subjected to a serious accusation by a senior garda that was subsequently referred by gardai to the DPP, who found no basis on which to pursue the matter.”

On Friday, Mr Kenny very briefly indicated to the tribunal that when sending an article for publication to the Sunday Independent, he had sent a document to INM’s lawyers outlining the DPP’s full directions against Sgt McCabe in order to verify what he was writing.

But Mr Kenny’s article of March 2, 2014, appears to be the only one he wrote in which he mentioned the DPP’s directions around that time – so it seems reasonable that Mr Kenny would have sent it before the March 2, 2014 article was published.

In conclusion, given Mr Kenny reported on the DPP’s directions in the Sunday Independent on March 2, 2014 – a week before Mr Williams even met Ms D on March 8, 2014 – it begs the question: did editors in INM, and/or the company’s lawyers, have a full understanding of the DPP’s unequivocal directions pertaining to Sgt McCabe – on foot of information from Mr Kenny – before they published Mr Williams’ four articles about Ms D?

And will the tribunal get to see this document?

Previously: ‘It’s A Farce. Everyone Knows…From Politicians To Cops To Journos’

Disclosures, Denials And The Journalists

Disclosures, Denials And The Journalists

9 thoughts on “I Told INM Maurice McCabe Was Innocent”