WATCH: A lighter moment in the Seanad as @SenDavidNorris recalls the first Gay Pride march in Dublin in 1974. He was speaking as the Seanad and Dáil supported a Labour motion on the 25th anniversary of the repeal of laws on homosexuality. *contains strong language* pic.twitter.com/dhSAFEwEDb

In the Dáil chamber on the 25th anniversary of decriminalisation, hugely moved to hear @campaign An Taoiseach offer state apology to all men convicted of consensual sexual offences and the shame and exclusion that followed from those unnecessary and cruel prosecutions.

The World’s Most Dangerous Caption Competition 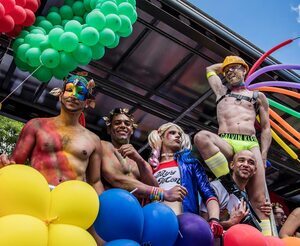 10 thoughts on “Pride And Prejudice”