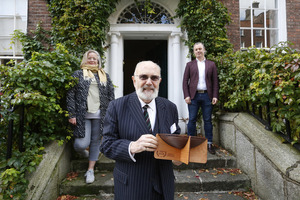 The award, presented by Sarah Williams (above left) Chair of GAZE (LGBT) Film Festival and Brendan Byrne (above right), Lead Of Accenture Ireland’s LGBTQ+ Network, is to mark Senator Norris’ “unending contribution and legacy to the lives of LGBTQ+ people in Ireland”. 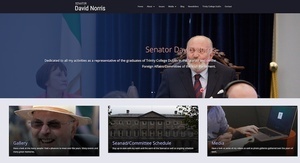 Someone is extracting the faintly scented urine. pic.twitter.com/d5fIuvFlbX

As far as I can see, his website’s news section was last updated in 2017.

Some videos uploaded from the Seanad in 2018.

What am I missing? pic.twitter.com/31cBH9Ad6Y

WATCH: A lighter moment in the Seanad as @SenDavidNorris recalls the first Gay Pride march in Dublin in 1974. He was speaking as the Seanad and Dáil supported a Labour motion on the 25th anniversary of the repeal of laws on homosexuality. *contains strong language* pic.twitter.com/dhSAFEwEDb

In the Dáil chamber on the 25th anniversary of decriminalisation, hugely moved to hear @campaign An Taoiseach offer state apology to all men convicted of consensual sexual offences and the shame and exclusion that followed from those unnecessary and cruel prosecutions. 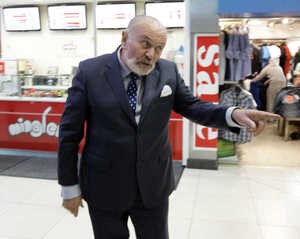 Wednesday: €1 Per Unit Of Alcohol 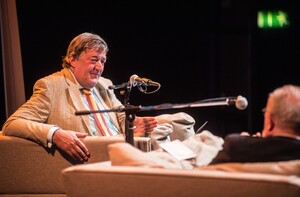 Literary aficionado and comedian Stephen Fry talked about all things Joyce and modernist literature with Senator David Norris as part of our annual Interview programme in Joyce’s own alma mater, Belvedere College.

Stephen Fry in interview with David Norris spoke about Ulysses fondly and quipped that “There’s very few books that could generate such a day. It’s marvelous. A book that’s entirely of it’s place, even the taxi driver from the airport was able to point out where he (Bloom) bought his lemon soap.” He went on to say how he “found Dylan Thomas to be a bit putrid” and that “the best writers of English always seem to be Irish.”

There were a few comical moments during the evening, at one point the laptop projecting behind Norris and Fry went into screensaver “searching” mode, Fry joked that “It’s probably searching for Grindr” to which Norris responded that he’s “only just found out about Grindr”

Fry spoke about his education and discovery of literature while watching the movie version of The Importance of Being Earnest at age 10/11. I” didn’t know language could be an art, I knew music could, I knew a picture could, It was a total revelation to me”…. “I kind of received an accidental literary education outside school and I found language to be a great deflection for bullies.”

Stephen Fry congratulated David for his part in the Marriage Equality campaign to which the audience gave a raucous cheer. 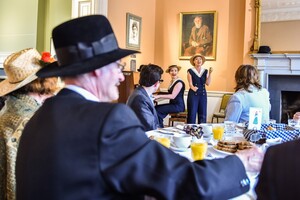 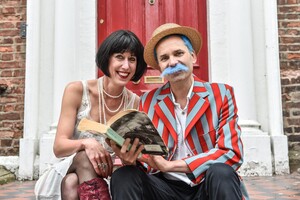 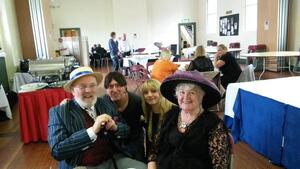 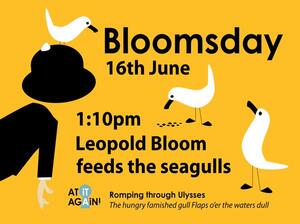 A group of actors will feed seagulls at O’Connell Bridge/bachelor‘s Walk.

Ned O’Sullivan is not welcome 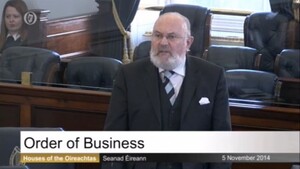 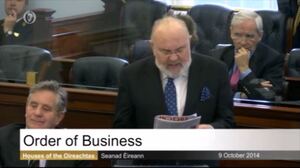 Senator David Norris raised the appointment of Fionnaula Sheehan, Chief Executive of drinkaware.ie and chairperson of MEAS to the board of RTÉ.

With The Phoenix in hand, the Senator called for Minister Alex White to reject her nomination. 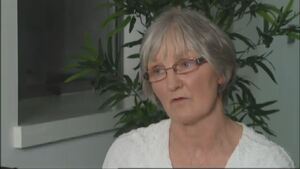 Lucia O’Farrell appeared on TV3’s Tonight With Vincent Browne Show last night to discuss the case of her son Shane who was killed by a hit-and-run driver outside Carrickmacross, Co. Monaghan on August 2, 2011

The man who struck Shane was Zigimantas Gridzuiska, 39, from Lithuania.

He was acquitted of dangerous driving causing death and he was given the choice of eight months in jail or to leave Ireland within 21 days. He chose the latter with appalling consequences.

Later, Senator David Norris said  he had contacted Justice Minister Alan Shatter about the case. and was told the family might consider counselling.

Lucia O’Farrell: “Shane was 23, he returned from college and he was to take part in a triathlon and, after having something to eat, he went out on his bike, a beautiful summer’s evening on the second of August 2011. When he hadn’t returned, Jim, my husband, and I went out and found that he had been killed in a hit and run. He was our only son, our lives had been destroyed but he was tossed on the road and left to die alone on the road in a hit and run. We were told it was a crime scene. They had nobody at the time for it.”

Vincent Browne: “And you were told that he was carried on the roof of the car for quite a distance?”

O’Farrell: “That subsequently came out in the court because they found fabrics of this clothing on the roof bonnet and windscreen of the car.”

Browne: “Right and the person who almost certainly was involved in this was a Lithuanian and he had a track record, prior to then, tell us a bit about that.”

O’Farrell: “He had come into the country, apparently he was known to Interpol. He was up for convictions for aggravated burglary, theft, road traffic offences, damage to property…”

Browne: “That was outside the country, before coming here?”

O’Farrell: “Yes, yes, and then he had 40 convictions in total on the evening of the second of August, when he killed Shane.”

Browne: “That was in Ireland?”

O’Farrell: “No, in Lithuania, Northern Ireland and here.”

O’Farrell: “He was well-known to the PSNI, he had served custody in the south of Ireland for heroin, he had a long criminal history, he was on a peace bond, he was on a suspended sentence, north and south of the Border, he was driving a defective vehicle, he was uninsured, he had falsified his documents since coming into the country…”

Browne: “And wasn’t there an instance where he was given a suspended sentence, subject to good behaviour, and then he was convicted of another offence and the judge in the second case was unaware of what had happened previously. The gardai failed to tell them.”

O’Farrell: “Well the reason Shane is dead is because of total Garda failure. In January 2011, seven months before Shane was killed, this man had received a ten-month sentence and it was adjourned for a year in the Circuit Court, for him to be of good behaviour with permission to bring him back at any stage if he reoffended, but four months after that decision in the Circuit Court, and I saw that order, he was up for five consecutive days of theft in another court room and the judge was unaware that he was to be brought back and gave him a four-month suspended sentence. The guards should have brought him back when he reoffended. So he now, in May, got a four-month suspended sentence and went on to kill our son. He legally shouldn’t have been on the road.”

Browne: “Right. And subsequent to the killing of your son there were further bizarre…”

O’Farrell: “Yes there were plenty of opportunities for the guards to prevent this happening. On the 6th of July, three weeks before he killed Shane, this car was killed up by the Drugs Squad, he was well known to them and he was found with a substance and charred tinfoil. Apparently this man snorted his heroin. He would put a lighter under the tinfoil and he snorted his heroin and instead of confiscating or seizing the car and preventing him driving this man was allowed continue to drive and hold a driving licence, which a person snorting heroin behind the steering wheel of a car is not conducive, because side effects of heroin…”

Browne: “OK, and in the hours before the incident, resulting in the death of your son, the gardaí were also involved?”

O’Farrell: “He was pulled up again an hour before he killed our son because the number was known to the Drugs Squad. He was found with two other Lithuanian heroin addicts, the driver was uninsured, they took them out and searched them, this car had no NCT certificate, it was driven by an uninsured driver and they were waved on. Within an hour our son was dead.”

Browne: “Subsequent to the death of your son, there were further bizarre twists to the story?” 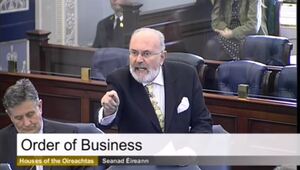 Senator David Norris called for a debate on homophobia in the Seanad today.

Speaking under Oireachtas privilege the senator pulled no punches.

No one was safe.