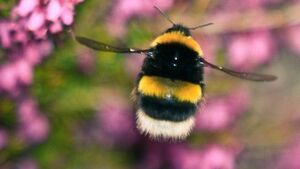 Ella McSweeney’s article on bees highlights the loss of wildflower and meadow habitats and the mass extinction of invertebrates.

An immediate remedy would be to curb herbicide use in verges and hedgerows and introduce a yearly (July/August) cut-and-clear-debris regime to facilitate wildflowers.

Herbicides kill most perennial plants and encourage coarse weeds- nettles, cow-parsley and cleavers, and need to be used again the next year.

Cut-and-clear weakens coarse weeds and promotes biodiversity, with the return of species such as cowslips, ox-eye daisies and native orchids.

New wildflower meadows are a possible solution – they require cut-and-clear if they are not to revert to scrub, or become dumping grounds.

If introduced in existing public parks and grassy spaces, such as the Phoenix Park, a cut-and-clear regime (hay-making, instead of the current mulch-mowing), combined with introduction of the native yellow rattle (which weakens coarse grass and thus facilitates perennial flora), would over a few years create wide acres of “new” wildflower meadows at little public expense.

To bee or not to bee (Irish Times letters page)

13 thoughts on “Bee The Change”