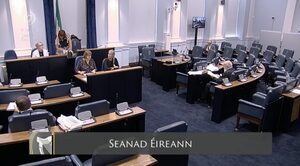 Statements on Palestine are being given before a vote on the Control of Economic Activity (Occupied Territories) Bill 2018 is taken. 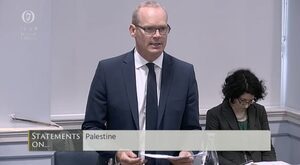 Tánaiste and Mininster for Foreign Affairs Simon Coveney was the first politician to make a statement.

“Speaking on behalf of the Government, I am unable to agree that this bill is the right way forward. And I want to set out carefully for the Seanad why I believe this is so.

“There are three broad reasons. Legal, political and in terms of practical effect. The overriding point which frames the Government’s view is that the bill asks the state to do something which we do not have in our power. Ireland is part of a single, unified EU market, external trade policy, that is trade by third countries into the EU, as well as trade between the EU members states is an exclusive competence of the European Union.

“We are not in a position to raise a barrier and declare that goods legally available elsewhere in the EU cannot be brought into Ireland for sale.

“There are some other legal difficulties with the bill but I will leave those aside for now because this is the essential point. It does not concern just how the legislation is framed or drafted, but the very ability of Ireland to enact such legislation within EU rules.

“Passage of this bill would therefore be a breach of European law and exposes Ireland to potentially legal action by the European Commission or affected individuals and potentially also to fines and damages which could continue as long as the bill remained in force. This is not a course that any Government could support….”

The Seanad debate can be watched live here

Give Me One Good Reason To Abolish The Senate

Take A Parachute And Jump

You Can Take His Hand

30 thoughts on “At The Seanad”