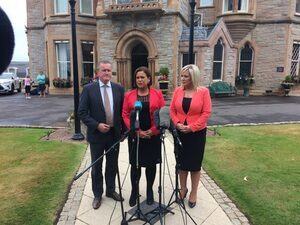 Mary Lou McDonald says her meeting with the Prime Minister this morning was nothing short of challenging. More coming up on @qnewsdesk pic.twitter.com/zNVpoQuA5R

Sinn Féin leader Mary Lou McDonald (centre) met with Britian’s Prime Minister Theresa May (top ) ahead of Ms May giving a speech in Belfast this morning about Brexit.

Ms McDonald spoke to Philip Boucher Hayes on RTÉ Radio One after they met.

Mary Lou McDonald: “It seems to me that she has come to Ireland to deliver a speech that really represents picking a fight with Ireland and picking a fight with the EU. I have put it to her that the rhetoric around protecting the Good Friday Agreement, in all of its parts, the rhetoric around preventing any hardening of the border is just that – it’s rhetoric. And it superseded entirely by her instinct, her desire to play to the Brexiteer gallery back in Britain and within he DUP. So it was a firm meeting a very challenging meeting. I said to her, umpteen times and I reiterated it again – a) that Ireland cannot and will not be the collateral damage of the Tory/Brexit. I have to tell you Philip I came away from that meeting with no sense of reassurance…

Philip Boucher Hayes: “Let’s break it down bit by bit Mary Lou. What was her reaction to your suggestion that Britain was picking a fight with Ireland?”

Mary Lou McDonald: “Of course she rejects that. I think you will see and you will hear when the, when her speech is delivered shortly that it is very much posited as a Unionist speech. I mean, there’s no great surprise in that. Theresa May is a Unionist and that’s fair enough.

“But she is particularly tone deaf to politics here in this part of Ireland. She doesn’t seem to have any deep appreciation of the fact that some 50% of the population would not ascribe to themselves the definition or the identity of Unionist. She seems to have only a very superficial understanding that the north of Ireland is a place apart…this place isn’t as British essentially, things are different here. And Ireland, the island, the North, in particular, but the island as a whole, because of the particularities here, requires a bespoke solution and absolutely needs a worst case scenario contingency plan – the backstop as it’s called…”

WATCH LIVE: PM @Theresa_May speaks about the Union and Brexit in Belfast https://t.co/wvVlwnMKEg

Theresa May: “I think, if we look at what happened in the referendum. A decision was taken that, across the United Kingdom, people would be asked their view on whether or not to leave the European Union. And parliament said and Government said that it would accept that collective view that was taken across the United Kingdom and that is exactly what we are doing. And within the UK there were different votes in different parts of the UK but, overall, the result was that people wanted to leave the EU and we’re delivering on that and I believe that it’s an important part of our, of people’s trust in politics, given that parliament said it was the overall choice of the people of the UK, that we respect that overall choice that they took.”