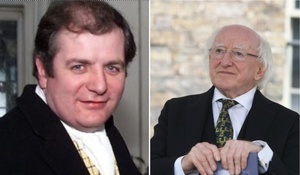 #GavinDuffy is a fox hunting lobbyist. If anything good is to come of his presidential bid let’s hope it’s a chance to raise awareness and finally ban this cruel and barbaric “sport” in Ireland #marian @MarianRTE https://t.co/6kw8RXa8hQ pic.twitter.com/OELnr2gggq

Duffy says he would be a different president to Trump (RTÉ)

Man Of The People