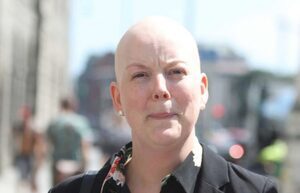 Ruth Morrissey's action v the HSE and two laboratories re incorrect reporting of two cervical smears to be adjourned until September. Court hears she has responded well to treatment to date and latest report from her oncologist gives her 'some hope'.

Laboratories wanted Mrs Morrissey’s action adjourned until November, after radical radiotherapy treatment and a further scan. But Mr Justice Cross said the case had started and it would be unfair to delay it past September.

“The legal action being taken by a 37-year-old woman with cervical cancer who is suing the Health Service Executive and two laboratories over the incorrect reporting of two smear tests, has been adjourned until September.

The High Court has been told that Ruth Morrissey, a mother-of-one from Limerick, has responded well to treatment so far.

Mrs Morrissey has been told that she could have less than a year to live.

… Mrs Morrissey’s lawyers wanted the case to continue in August.

But the two laboratories – Quest Diagnostics and Medlab Pathology – asked the court to adjourn the matter until later in the year.

They said it made more sense to continue the case after the result of that further scan were known.

Lawyers for the laboratories said there was now no imminent risk to Mrs Morrissey and less requirement for the matter to be heard urgently.”

Previously: ‘If He Doesn’t, I Don’t Think He Should Be In The Position He’s In’

And You’re Back In The Room

3 thoughts on “‘Laboratories Said There Was Now No Imminent Risk’”