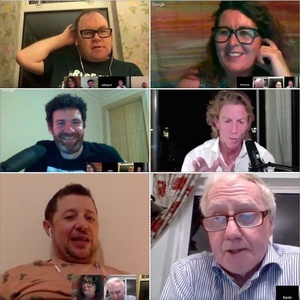 A big thank you to, clockwise from to left: Johnny keenan, celebrity accountant Vanessa Foran, ‘Preposterous‘, Kevin Higgins, Stephen Garland and Luke Brennan, our panel on last night’s ‘Broadsheet on the Telly’.

The, show can be viewed in its entirety above.

Lawyer Kevin, who advises the Tuam Survivors Network, returned to take us through the stand=off in Tuam and Terry Prone’s role advising both the nuns and the government.

Stephen, who suffers primary progressive MS, gave us an update on his condition while Vanessa and Johnny shared their review of Stephen’s one-man show in Longford ahead of a run at the Edinburgh Festival. Luke, meanwhile, showed us his latest etching.

Broadsheet on the Telly TONIGHT