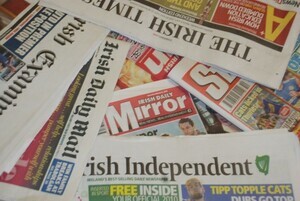 For years I’d heard of a thing called the 4th Estate, usually on the telly and in fillums like, where its mention would be treated like it was a sacred place, and only occupied by greats and gods with things like Peabody and Pulitzer in their bios.

The special people that get books written about them and Hollywood greenlights over their biopics. People who we know immediately just by their surnames; Amanpour, Adie, Bernstein, Cronkite, Fisk, Guerin, Murrow, Pilger, Woodward, and whatever ye’re having yerselves – see that? in abc order. Here’s anudder one; The Post.

Anyway, during the hot spell there, while trying to look busy when I was dossing off, I started googling scantily on the phone.

And as it turns out this 4th Estate is quite interesting, historically I mean, in that it has a bitta’ve tale to tell for itself.

European, naturally, in origin, and grew as a spur off a set up titled “Estates of the Realm”; basically, a caste system for Western Europe. Church, Royalty and the likes of meself, the Commoners. Them and Us.

And to keep everyone in their rightful Realm, lawyers were needed, so along came the 3rd Estate to facilitate the independent liaison between us and them. Naturally Lawyers need money and we know how that goes, and it was the same in Medieval times as it is today.

So along comes Edmund Burke, who during a debate (1787) about opening the Commons to the newspapers and journals of the day, addressed the new arrivals to the viewing galleries as the 4th Estate.

A hundred years later, pretty much, that Burke 4th Estate was now firmly rooted as the Realm of Journalists. This is proofed when the great observer himself, Oscar Wilde, stamped their permanent occupation of the 4th Estate with;

“But at the present moment it is the only estate. It has eaten up the other three. The Lords Temporal say nothing, the Lords Spiritual have nothing to say, and the House of Commons has nothing to say and says it. We are dominated by Journalism.”

One of our own said that 127 years ago. And instead of Us, the Commoners, it was the other two realms, Church and by now Big Business, Money and Power lured the 4th and bought them, bribed them, pampered them and fattened them.

So here we all are now, along with Broadsheet, discovering, planting and growing, what has easily become the 5th Estate. But here everyone can walk talk, or not, with the same swagger and access as anyone else who holds membership of another realm.

Here in the 5th the realms are one and the same; the older realms and their acquisition, the 4th, can be identified by their behaviour since this is the open ground and there is nowhere to hide. We are all occupants, blue tick or not, of this feral yet democratic open free-for-all 5th Estate.

It is the survival of the fittest, yet the minority and weaker get to leave their prints and say we were here and this was our story.

Here We are not polarised by the other Realms, because the internet cannot isolate itself into any corner, singular side or argument. Here, although the other Realms and particularly the former Grand 4th Estate will still try and choose our facts for Us, it is here in this 5th Estate, that

We, the forgotten realm of commoners get to choose the facts we believe. Here We get to decide what news we believe. It is here that our decisions will now be take place and our opinions formed.

The most vulnerable thing in Ireland now is our democracy. That is not an overstatement or a wild call-to-arms.

Nothing is more important to us Citizens, yeah, Citizens. Citizens Vote, customers take surveys and give feedback, so that’s that one out of the way, but why the fúck anyone needed reminding I’ll put down to the heat.

I’ve said here again and again , yet ye still wait to hear it from a mainstream veering or need to see the limps from mainstream tagging in. Giving out the wrong information, or even none at all, does not allow the Irish Citizen to make good decisions about its future.

In that 127 years since Wilde declared We are dominated by Journalism, that Blind Eye, that Bias, that Special Interests and their Influence, have put Kerry Babies, Mother and Baby Homes, Institutional Abuse, Institutional Failures, Endemic Corruption, Bail-Outs and Gombeenism into our History and National Profile.

And the bodies left in the carnage are not just in septic tanks waiting for Us to demand the truth and remedy the failures. We still do not own the majority of our schools or our Hospitals ffs.

The former 4th Estate needs to allow itself be burned into ruins so that it can only be re-built from new foundations.

To protect its Independence into the future and keep it free from Influence it needs to establish walls and safeguards so deep that it can never be bought and compromised again, and like here in the 5th, only the fittest will be allowed survive there.  It needs to prove itself.

It needs to reclaim the vocation of Journalism, while the other Realms, including the 5th btw, need to let it rebuild and repent. We need to let it make good. Let them prove they have replaced smear campaigns and self Interest by giving us all the facts.

Let the 4th Estate come back and prove they are capable of being that intermediary between the realms.

There is nothing more important to our Country than a well-informed Citizen. So let’s future proof the gaff.

15 thoughts on “The Fifth Estate”