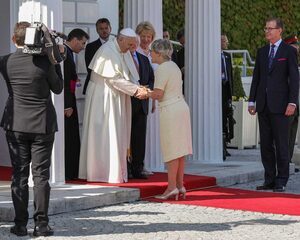 .@KZapponeTD reveals what she said to @Pontifex about the Tuam mother-and-baby home pic.twitter.com/Ca9z1LEZ2x

This morning, she was interviewed by Miriam O’Callaghan on RTÉ Radio One (above) and recounted that she said to him:

“Pope Francis, I am responsible for the Tuam Mother and Baby Home. Children’s remains were found in a sewage system there. I hope the church will make reparation for its part in this shameful chapter. It is important and I will write to you in detail.”

Ms Zappone has since published on the Department of Children and Youth Affairs website what she wrote to Pope Francis.

As Minister for Children and Youth Affairs and an Independent Minister of the Government of Ireland I am writing to you in the hope that the church will accept its responsibilities and make reparation for its part in a very shameful chapter of Irish history.

Mother and Baby Homes came to public attention in Ireland during the summer of 2014 following a series of disturbing reports of high mortality rates and claims of possible burials of children on the grounds of a former home in Tuam Co Galway. The then Government decided to have these matters investigated and a statutory Commission of Investigation was established in February 2015.

The Commission has been examining a wide range of concerns related to the institutional care of unmarried mothers and their babies during the period 1922 to 1998. The Commission is examining 14 Mother and Baby Homes and 4 County Homes. It will in time provide a full account of what happened to vulnerable women and children in these institutions; how they came to be there; and the pathways they took as they left.

An early focus of the Commission’s work was to examine the Tuam site to address questions about the alleged internment of human remains. As part of this process, the Commission conducted a series of surveys and test excavations, commencing in October 2016. I visited the site myself and met former residents and relatives shortly before these works commenced.

The statutory Commission of Investigation confirmed the presence of human remains on the site of the former Bon Secours Mother and Baby Home in Tuam. The Home was run by the Bon Secours Sisters from 1925-1961 in what was previously a workhouse dating back to famine times. In the 1970’s the former home was demolished to make way for a local authority housing estate. A small memorial garden is maintained by local residents and there is also a children’s playground on the site.

The Commission’s excavations have revealed that human remains are visible in a series of chambers that may have formed part of sewage treatment works for the Home. The Commission believes that there are a significant number of children’s remains there. It recovered some juvenile remains for detailed forensic analysis. From this analysis, it has determined that the remains are between 35 foetal weeks and 2 to 3 years of age. From carbon dating it has correlated the age of these samples with the time period during which the home was in operation – between 1925 and 1961.

This news was met with widespread disgust both in Ireland and abroad. There were suspicions about burials of this kind in Tuam for some time.. However, it is fair to say that the confirmation received from the Commission of Investigation caused many people to demand that dignity and respect be afforded to the memory of the children who lived their short lives in this Home. We also owe it to the families of these children to now do the right thing by their loved ones.

We have now put in place a series of actions to ensure that we have an appropriate and respectful response to the discovery.

Since then, I have instructed an expert team to do further work on the site to determine the options that are open to us to fulfil our duty to these children. The team has reported offering options including a complete excavation of the site and DNA analysis of the hundreds of remains contained therein.

A consultation has also been carried out with survivors and local residents about what they would like to see happen on the site in Tuam.

There was little compassion shown to children and their mothers in this home.

We cannot change what happened to them. For the little ones whose remains are in a sewage system, we owe them dignity in death. For their mothers, siblings and families we need to give them some peace.

It is my strong conviction that given the role of the Church in this shameful chapter of recent Irish history it must play a practical role in addressing the hurt and damage. I believe that the church should contribute substantially to the cost of whatever option is decided by the government. This should be done willingly, unconditionally and quickly. Nothing less will demonstrate remorse.

I look forward to receiving your response.

With every best wish, sincerely yours,

Journalist Conall Ó Fátharta, of the Irish Examiner, has tweeted the following…

Would have been nice if @TodaySOR would have asked @KZapponeTD why her Dept won’t tell us the sample of records being looked at in the illegal adoptions scoping exercise, methodology. We all just have to wait and see

Worth noting that @KZapponeTD dept knew about infant mortality, concerns about illegal adoptions and trafficking at Tuam and Bessborough in 2012 – two years before CCorless discoveries. Guess what was done? Nothing

Did @KZapponeTD mention the hundreds of other deaths at other sites to the Pope? Deaths registers for Bessborough and SRAbbey have been with the HSE and now Tusla since 2011 – names, ages everything. The entire discussion seems to be about one institution and one issue

12 thoughts on “‘Her Department Knew About Infant Mortality, Concerns About Illegal Adoptions And Trafficking In 2012’”