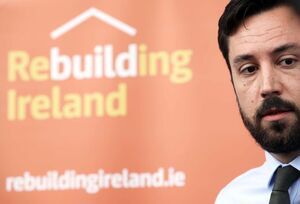 During the interview, Mr Murphy told Ms O’Callaghan he’s expecting the figure for the number of people using emergency accommodation in July – expected to be released this week – to increase from the figure of 9,872, including 3,824 children, recorded in June.

“What we have at the moment is a very acute supply problem which is being corrected and we can go into that in some detail in relation to the CSO figures.

“…what we saw for the last quarter, was about 4,500 new homes were completed. What we actually need to achieve is somewhere between 6,000 and 8,500 new homes being completed every quarter and then that continuing for a steady period of time.

“We have to move away from these violent swings in our housing output where we go from 90,000 – which is twice too many – people’s properties being overvalued and people then falling into massive negative equity and then, in a few short years, people living in cramped accommodation, trying to raise a family…

“Importantly though, this year, Miriam, about one in four or one in five new houses that are built will be social housing homes and that commitment maintains for the next ten years.”

“…Again, looking at the CSO figures, which are independent from my own department, last year about 20,000 places to live were made available, 14,500 new homes were built, another 2,500 homes came out of vacancy – stock that wasn’t being used.

“Another 1,000 homes which had been started before the crash but were never finished were completed and about 2,000 new student bed spaces. So, that’s a dramatic increase.”

“…If you look at something like rough sleeping. This time last year it was far worse than it is now. We’ve seen a dramatic reduction in people who are sleeping rough.

“…I don’t have them [homeless figures for July] yet. We’re still compiling them. My understanding is that they will be slightly up because we are, again, seeing an increase in presentations.

“…My understanding is that the figures have gone up in one particular region which would give me reason to believe that actually they’ll be up overall.

Towards the end of the interview, Ms O’Callaghan asked Mr Murphy about a report by Daniel McConnell, in the Irish Examiner, last week which claimed some Fine Gael ministers fear their “posh boy” image and failure to solve the housing crisis will “kill” their election hopes.

“Miriam… it doesn’t matter where I’m from or where I grew up or how I dress or how I look or how I speak, none of these things matter and people who, serious people really who shouldn’t entertain those types of ideas but, unfortunately, some of our politicians and some of our commentators are.

“What matters is: are our policies working?”

“…Fine Gael is the party of the Just Society. Declan Costello – that people growing up would have opportunities, the same opportunities, regardless of who there parents were or what they did…”

“…If people think the problem or our housing crisis is the fact that I am a posh boy from Dublin 4, then they are missing the mark completely…”