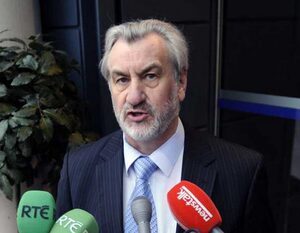 Independent News and Media PLC announces that Mr. Kieran Mulvey has been appointed as a non-executive director of the company with effect from today.

Mr Mulvey has been nominated to the board by Mr Denis O’Brien, the company’s largest shareholder and, accordingly, the board has determined that Mr Mulvey should not be considered to be independent on application of the independence criteria set by the UK Corporate Governance Code.

INM is currently actively engaged in securing a further candidate for appointment to the board to restore compliance with the board constituent provisions of the code. The company hopes to make a further announcement in this regard in the coming months.

From a statement released by Independent News and Media this afternoon.

A row has blown up between Independent News & Media (INM) and Denis O’Brien, the publisher’s largest shareholder, over the composition and size of the company board.

O’Brien, who owns 29.9% of INM through his holding company Baycliffe, wrote to the publisher on June 12 to say he wanted to nominate Kieran Mulvey, a former head of the Labour Relations Commission (now the Workplace Relations Commission) to its board.

Baycliffe has since complained that Mulvey has been “messed around” by delays in the appointing him.

INM insists that any new O’Brien appointment must be “paired” with a new independent director so as not to affect the current balance on the company’s board. It has also expressed concern about INM’s board becoming too large.

INM and O’Brien in board nominee dispute (Mark Tighe, The Sunday Times, August 5, 2018)

Read the statement in full here

A €140 Million Write-Off From Bank Of Ireland And AIB

9 thoughts on “‘Mulvey Should Not Be Considered To Be Independent’”