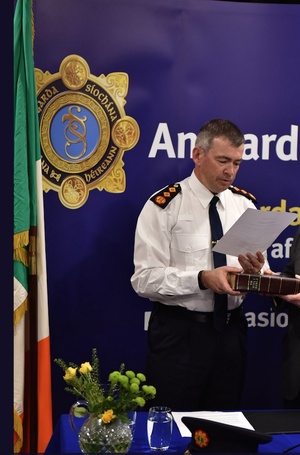 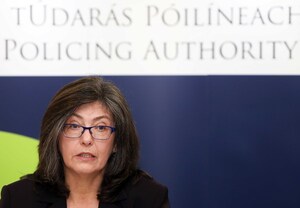 During the interview, Mr Reynolds raised Mr Harris’s evidence to the Smithwick Tribunal in 2012.

Judge Smithwick ultimately found there was collusion between members of the gardaí and the IRA in the murders of two senior RUC officers – Chief Supt Harry Breen and Supt Bob Buchanan – on March 20, 1989 and that gardaí in Dundalk were most likely involved.

Mr Harris’s evidence was given to the tribunal in private but it was later read into evidence.

Paul Reynolds: “Well, what about the concerns in relation to Dundalk, in particular, whereby the evidence that he gave at the Smithwick Tribunal, in relation to Garda collusion. On the one hand, he has given evidence that the gardai colluded with the murders of two senior police officers and, on the other hand, he’s the head of this force.”

Josephine Feehily: “Judge Smithick made the conclusions in that tribunal and I’m not going to go beyond those. He heard all of the evidence, he took account of all of the aspects that he wanted to take and he reached a conclusion. And, again, that seems to be something that’s overlooked in the conversation. It was a judge-led tribunal and the judge drew the conclusion.”

Reynolds: “That’s true but it wasn’t accepted by the Garda Commissioner at the time and it hasn’t been accepted by many gardai today. It remains a sore point in Dundalk and now we have the man who gave that evidence at the top of the Garda force.”

Reynolds: “I accept that but do you see the difficulty?”

Feehily: “I see that commentators are taking one particular aspect of policing and they are, before the commissioner has had an opportunity to address it, they’re drawing conclusions. What I’m saying is that the person who heard all of the evidence drew his conclusions, in accordance with his job and they stand.”

The Smithwick Tribunal report can be read here

Earlier: A Show Of Force

Basically they are asking us to believe that in the course of a 30-year campaign the most sophisticated terrorist organisation in the world did not plant or acquire any agents in our security institutions, including the Defence Forces and the Garda.

Justice Peter Smithwick accepted Drew Harris’s evidence that he had intelligence pointing to collusion, not least because Garda intelligence confirmed it.

“I think it significant,” Smithwick concluded, “that both police services have received information from reliable sources indicating that there was collusion.”

Good enough for me.

Cast A Paul Over The Story

12 thoughts on “A Minute Past Midnight”