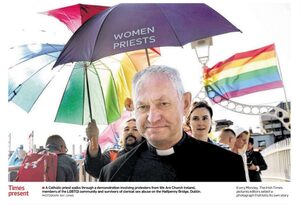 On page 12 of The Irish Times on Monday, August 27

I am writing to note a case of mistaken identity in the prominent, full-colour photo which appeared on page 12 on your edition of August 27.

In this photo is a man wearing a clerical collar; the caption reads “A Catholic priest walks through a demonstration involving protesters from We Are Church Ireland, members of the LGBTQI community and survivors of clerical sex abuse on the Halfpenny Bridge, Dublin”.

Also underneath this photo is the explanatory note that every Monday the editors select a photograph to feature that “tells its own story”.

If the photo is indeed intended to tell its own story then it needs to be pointed that the man in clerical collar is in fact not a Catholic priest but a deacon in the Estonian Evangelical Lutheran Church! In addition to his regular ministry among the Estonian community in Dublin, he joins us regularly on Sundays in Christ Church Cathedral, as the Church of Ireland is in full communion with his church. I hope that these small factual corrections might help the photograph to better “tell its own story”.

The deacon stays in the picture (The Irish Times letters page)

Don’t Gnocchi It Till You’ve Tried It

Taking The A Bus

12 thoughts on “Telling Its Own Story”