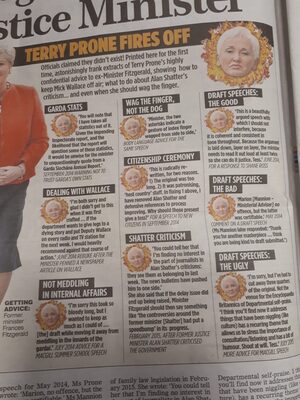 In the Irish Mail on Sunday and The Sunday Times.

Dublin Institute of Technology lecturer, journalist and FOI sleuth Ken Foxe reported on the cache of correspondence he received from the Department of Justice – between Terry Prone, of the Communications Clinic, and the former Minister for Justice Frances Fitzgerald and/or her officials, during her time as minister.

Mr Foxe sought the correspondence between Ms Prone, who signed off as ‘Tess’ in correspondence, and Ms Fitzgerald between May 8, 2014 and March 11, 2017.

And then the Department of Justice informed Mr Foxe there were more than 190 such records.

Thread by @kenfoxe: “Thread – The and emails. Terry Prone removes all references to official statistics from a ministerial […]” #FrancesFitzgerald #TerryProne #garda

Last Thursday, Ken Foxe was a special guest Broadsheet on the Telly and shared his knowledge of the Freedom of Information process in Ireland. Watch back here.

21 thoughts on “Another Fine Tess”