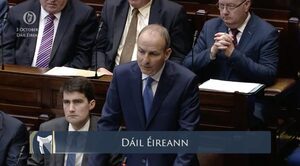 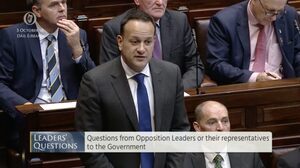 Fianna Fáil leader Mícheál Martin raised the housing crisis and asked Taoiseach Leo Varadkar if he could explain “the absence of delivery [of housing] across the board” and if he accepted Ireland was in an “emergency”.

Mr Varadkar said he’s already on record as saying there’s an emergency and said he knows people across Ireland are frustrated with the pace of delivery of houses and that he’s frustrated, too.

He said he could “speak for hours” about all the things the Government is doing to fix the crisis but he said he’d mentioned the five main strands of the Government’s response to the crisis.

He said Ireland will undergo the “biggest social housing programme in decades in Ireland” with “over 100,000” social houses to be provided over the next ten years  and “8,000 this year alone”.

He said the Government is also “accelerating the supply of homes for people to buy” with 20,000 new houses and apartments to be built in Ireland this year and 25,000 next year.

Mr Varadkar also mentioned how the Government brought in rent caps in urban areas to “put a stop to the spiralling double digit rent increases”.

And he said “rough sleeping” is down by 40 per cent and “that didn’t happen by accident”.

He said: “It happened because we worked with NGOs and charities to get people off the streets.”

And, finally, he spoke about the recent launch of the Land Development Agency.