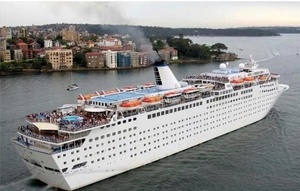 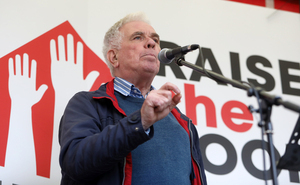 From top: A cruise ship earmarked for the homeless in San Fransisco, USA;  Fr Peter McVerry at the Raise The Roof protest yesterday

Jack Power, in The Irish Times, reported on correspondence he obtained under the Freedom of Information Act which shows that Dublin City Council had been considering a plan to house up to 150 homeless people on a rented cruise ship.

The plan was later shelved.

But Mr Power has since been told by the council that “it is something we are not ruling out”.

The correspondence obtained under FOI also showed that the council believed meeting Housing Minister Eoghan Murphy’s target of housing 300 extra homeless families in family hubs by the end of the year was “unlikely to be achieved”.

He said the council wouldn’t be able to afford to hire a large cruise ship or have one docked close enough to Dublin city centre which is where it would be needed.

“Part of the problem is the number of people and families who are coming into homelessness is far greater than the number that the local authorities are able to house.

“…For three years. We have an emergency, let’s have a three-year emergency action, you stop these families, most of them coming into homeless, and then you’re in a position to deal with the families who are currently homeless.”

“That seems cold-hearted but that is the reality of the situation. So yes, we must make sure that people aren’t evicted illegally but, essentially, if you decided that no evictions were allowed from now on, or people should not tenancies anymore, it would mean that less houses would be built so it would.

“And that would be the unintended consequence. I’m sorry. I’m sorry to be the only grown-up in this conversation here – but that is the problem there.”

Fr McVerry disagreed with Cllr Smyth and said during the three-year moratorium, if someone is selling a commercial property, and there are tenants living over the property, than the tenants shouldn’t be affected by the sale.

Fr McVerry also said if a bank wants to sell a repossessed house, the bank should sell it with the tenants left unaffected.

And So To Bed