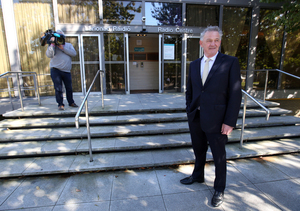 Peter Casey: “Of all the candidates that are in the field, there isn’t a candidate that has got my international experience. I have a deep understanding of the whole Northern Ireland situation, obviously, been born in Northern Ireland.

“I’ve, more than any other candidate, I’ve lived a third of my life in Australia, a third in America, a third in Ireland. You know. I’ve got a deep understanding of what it means to actually be an Irish person who had to go abroad. You know, so. That’s what we need in the presidency.”

Dr Gavin Jennings: “You’ve been 38 years abroad, what makes you more qualified to be president than the other candidates?”

Casey: “As I said, I really, we have got, as a country, we’re just, there’s no other country like Ireland. We have got 10 times the number of people living outside of the country. A third of the people actually born in Ireland have now moved out of Ireland – 1.5million people have moved out of Ireland. And I was one of those people. I’m fortunate enough to be able to come back but as president, I’d be able to understand how to connect with them in a very meaningful way, for the benefit of people in Ireland.

“So , one of my platforms is to encourage the Irish abroad to send children over to Ireland for a month so they can understand really what it means…”

Jennings: “At their expense, yes?”

Casey: “Of course, of course, at their expense. And it would be to the benefit of Ireland. Cause there would be a lot of tourism, they’d spend a couple of weeks in the Gaeltacht, a week up in the North, up in Derry, up in Belfast, understanding the Troubles. And then a week down in Dublin, understanding the history of the Irish State. You know. So.”

Jennings: “You’ve spoken about connecting Ireland with its diaspora with technology. What are you proposing exactly?”

Casey: “Yeah, well I would go to tender and ask all the big social media companies to tender. And the bid would start at a billion dollars and I’d say, ‘look we’ve got about 80 million people, we want to really connect in a meaningful way’ and, you know, it would be a platform which would be managed and controlled by the Government, in a similar way to the Federal Reserve Bank. The Federal Reserve Bank is not owned by the US Government but it’s managed, controlled and regulated by it. This platform managed, controlled, regulated by the Irish Government…”

Casey: “To actually connect with the Irish but it would also…”

Jennings: “But I can contact my sister by FaceTime at the moment?”

Jennings: “What are you talking about?”

Jennings: “And as president you would lead this, yes?”

Casey: “A president is allowed, under the constitution, of course, he’s not allowed to get involved in Government policy but what he is allowed to do is to inspire and motivate other people to actually get involved and do these sorts of programmes. Yes.”

Jennings: “Just to come back to issues at home to get your views on what’s happening here. We’ve a homelessness crisis at the moment. Do you believe that Irish people should have a constitutional right to a home?”

Casey: “By giving them accommodation if that’s what it takes. I think absolutely free education. I believe that healthcare, it should be paid for…”

Jennings: “The issue of housing, I mean, we’ve 10,000 homeless people at the moment. What would you suggest is the solution there?”

Casey: “The housing problem didn’t start overnight, it’s been building, and building and building and the reason for it is there has been an over concentration in the major areas such as Dublin, Cork and Galway and a complete lack of building out the infrastructure in rural Ireland.

“One of the things I suggested was that, you know, we should be investing and encouraging companies to set up in the periphery of Dublin. Everybody wants to be in Dublin but we’re now in a situation where people who were born in Dublin, brought up in Dublin, can’t afford to live in Dublin. But the answer is to invest in rural Ireland – to make it so that people can support their families in rural Ireland. One of the things I proposed was to give a €3,000-€4000 grant, sorry tax break for people who are doing the reverse commute.

“You know, everybody is now coming from Wexford, Drogheda, Dundalk, into Dublin. And Dublin is overheated. If we were to give people an incentive to go and find employment in the rural, peripheral areas, that would encourage companies to set up there because they know they’ll be able to get the talent.

“At the moment, there’s a huge shortage of talent in Dublin.”

“You know, actually, one of the more extreme suggestions was that we put a ban on hiring in Dublin, in the technology centre, except for replacement. In other words, Microsoft announced that they were creating, and the minister announced it, 250 new jobs. They’re not new jobs. What they’re going to do is they’re going to borrow the people from the 250 people will come from other companies in Dublin.

“And I’ll be sitting over at Microsoft trying to find these people. I’ll go and I’ll offer a job to somebody from Accenture and they’ll go ‘Oh no, I’m quite happy here’. ‘Ok, well we’ll give you 20 per cent more if you move to Microsoft’. They go to Microsoft, then there’s a gap over in Accenture. Accenture go over and say ‘Ok, we need to fill this’. They come to me, I’m over, working over at Google. They say ‘over here’ and ‘no, I’m very happy at Google’. They say ‘we’ll give you 20 per cent extra’. What’s happening is, it’s musical chairs going upwards and upwards and that’s what’s causing, the landlords look around and say ‘we can charge more rent. And then what happens is that pushes people off the bottom of the rental ladder.”

Casey: “Yeah, I mean, the ridiculous situation down in Cork where the Travellers were refusing four-bedroomed houses because they weren’t being given stables with them. I mean you’ve got to step back and ask yourself. I mean when did…”

Jennings: “Where was that? Sorry?”

Casey: “I think it was in Cork wasn’t it? They had built these four-bedroomed houses and they were saying….”

Jennings: “I think it was in County Tipperary.”

Casey: “Tipperary? I’ve been on the road a lot and I’ve been getting soundbites but they turned down houses because they didn’t have stables. I mean, that’s, where, where are we going to with this? It’s just nonsense.”

Jennings: “‘I’m still trying to work my mind around why people complain about being put up in a hotel’ – I think is the quote attributed to you.”

Casey: “I may have said something along, I mean, there’s people being put up in hotels and I think that’s sad when we’re at the situation where we can’t…that’s just a symptom of the problem though. The problem is lack of investment in rural Ireland. And Dublin is overheated and we haven’t got the ability…You we’re obviously starting now to build high-rise buildings, we’re starting to get involved in lower cost houses. In, for example, in America, they’ve timber frame houses in a matter of months. Whereas over here, they’re all brick and concrete houses…takes far too much time.”

Jennings: “Let’s move on. Are you a feminist?”

Casey: “I’m very much. I’ve got three amazing, very strong-willed daughters. An amazing strong-willed wife. So I’m a big supporter of obviously. And my CEO of my company of 20 of the last 23 years were women. So.”

Jennings: “What’s the biggest impression of women currently do you believe?”

Casey: “I think it’s amazing now that there’s no bar whatsoever to what women can achieve. And there will be a woman president of the United States, you know, in the next probably ten years. I’ve absolutely no doubt. So I think, you know…”

Jennings: “Do you support the #MeToo movement?”

Casey: “You know absolutely. I think that anything that highlights sexual discrimination in the workplace or in society should be supported.”

Jennings: “How much are you worth?”

Casey: “Lots, lots. [laughs]. I’ve no idea. How much is a private company worth? It’s worth what somebody will pay for it you know? I own one home up in Donegal and I’ve got some business interests there but, you know, I’m comfortable. I’m able to pay my children’s school fees. And we’re financially fine.”

A Pig In A Poke