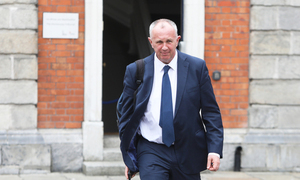 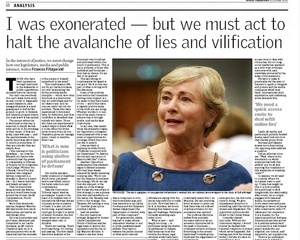 Irish Examiner journalist Mick Clifford appeared on Eamon Dunphy’s podcast The Stand to discuss the media’s response to the publication of the Charelton Report.

In particular the ‘vindication’ of Frances Fitzgerald.

Eamon Dunphy: “Mick, I listened to The Marian Finucane Show on Sunday, which hundreds of thousands of people listen to every Sunday, it is broadcast by RTÉ , the national broadcaster, funded by the public and last Sunday it was said by Marian Finucane repeatedly that Frances Fitzgerald, the former Minister for Justice, who had to resign over this business, had been ‘completely vindicated’ by the Charelton Tribunal…

…A wrong in other words had been done to Frances Fitzgerald. Now this wasn’t a throwaway comment. The Finucane Show spent at least twenty minutes on this and it was in the light of what i read in the report, outrageous….I have read the report, you have read and written about it. The report does not completely vindicate Frances Fitzgerald, does it?”

Mick Clifford: “…I heard that show and I was quite taken aback by it… now it has to be said that a certain amount of discussion was around a piece by Frances Fitzgerald penned herself for the Sunday Independent, but let’s put things in context.

Frances Fitzgerald did not and I never for a second suggested it and as far as I know the vast majority of anybody who had anything to do with this story suggest that she had in any way a nefarious motive toward Maurice McCabe, that she in any way set out to do him ill, that she was in any way aligning herself to anyone who was trying to smear him. That was never suggested.

Now, a couple of politicians brought that up in the Oireachtas. They may have issues there on whether they should apologise or not, but ultimately that was not the reason that she was forced to resign and the impression that is put out there is that everything that preceded it is suddenly washed clean by the Charelton Report and, quite frankly, that is not the case.

…Frances Fitzgerald was minister when the O’Higgins Commission was on. At the beginning of that commission, a row blew up. The solicitor for the senior Gardai described it as ‘political dynamite’.

Now, Charelton did say there was no way she could have remembered it  However, a couple of months later, RTÉ’s John Burke put in questions in relation to it and there was suggestion conveyed through the Department that he was questioning why an aggressive stance was taken against McCabe.

Now, the Minister was going on radio and she was told you can say Sgt McCabe has the full confidence of yourself and the commissioner yet being told that was not necessarily the case in terms of what was going on behind closed doors. So she had an awareness there

Roll on to May 2016, when the O’Higgins report was published and when the Examiner broke the story that this row occurred. She appeared on Prime Time and she answered questions in the Dáil.

Nowhere at that point did she convey the reality that she had been aware something had gone on. She gave the impression that this was the first she had heard of anything. And subsequently Leo Varadkar, on her behalf, said that in the Dáil.

So we go forward to November/December 2017 when this blows up (again). Alan Kelly, presumably on the basis of information he received, started submitting questions to the department of Justice and what occurred then was a drip feed,.

He didn’t get the answers he required, he put in more questions, it spread into the Dáil, Micheál Martin took up the cudgels and he started asking questions and it became effectively a runaway train. That is the nature of politics. What happened thereafter was political.

Then it emerged these emails that showed she had been informed back then and she had knowledge of it. Nobody was suggesting she was out to get McCabe. What it became was it showed she knew about these issues and she had said nothing and it effectively had to be dragged out of her.”

5 thoughts on “A Strange Kind of Vindication”