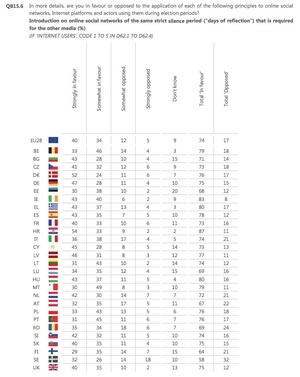 From a new Eurobarometer poll

The results of a new Eurobarometer poll on Democracy and Elections have been published, after fieldwork was carried out in September.

Almost 9 in 10 (87%) Irish people, 3rd highest in the EU, want online social networks and other Internet platforms to disclose the amount of money they receive from political parties and campaign groups as well as the support they themselves provide to these political parties and campaign groups. The EU average was 80%, highest in Greece at 90% and lowest in Lithuania at 67%.

86% of Irish people, 5th highest in the EU, want online social networks to disclose what content and publications are online advertisements and who is paying for them. The EU average is 81%, highest in Greece at 92% and lowest in Lithuania at 70%.

84% of Irish people consider that the rules traditional media have to observe during the pre-election period should also apply to online social networks, Internet platforms and the actors using them. The EU average was 76%.

83% of Irish people are in favour of introducing for online social networks the same strict silence period that is required for other media. The EU average was 74%.

The results of the Eurobarometer poll can be downloaded here

How Do EU Feel?