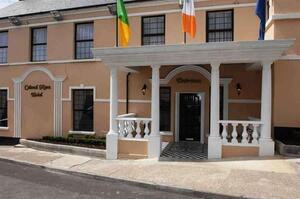 At the Methodist Hall on the Main Street of Moville, Co Donegal.

Fáilte Inishowen will be hosting a public information meeting about the arrival of asylum seekers to Caiseal Mara Hotel in Moville.

“Fáilte Inishowen is pleased to announce the first event in its campaign to ensure that all of the asylum seekers arriving in the coming weeks are warmly welcomed and strongly supported in settling in to this vibrant community by the sea.

“All are welcome to attend, and representatives from health, education and social agencies in the area will be in attendance to offer their perspectives and to take questions from the floor.

“Invited speakers who have come through the discredited system of Direct Provision will focus on how best local people might show solidarity and friendship to those who are arriving.

“Vukasin Nedeljkovic is an artist and researcher from Serbia whose excellent multidisciplinary project, Asylum Archive, documents his own experience of Direct Provision.

“Having sought asylum in Ireland in 2007, Vukasin was put into the Direct Provision system and, faced with the stress of life waiting to for his asylum application to be processed, began his excellent project ‘as a coping mechanism’.

“Vukasin’s recently-published Asylum Archive book tells a story of weight and importance that too few people have heard about — we will be petitioning Donegal County Library to include a copy in every branch.

“South African activist Lucky Khambule [him off the telly!] has called Ireland home for the last five years.

“He lived in Direct Provision for three years and this experience drove him to co-found MASI, the Movement of Asylum Seekers in Ireland — in pursuit of justice, dignity, social equality and the right to work for people seeking asylum as they had been banned from doing so since Direct Provision was enacted.

“Caroline Radcliffe from Moville is experienced in the field of human rights and will speak of her time working with asylum seekers in the hostel that existed in the early 2000s in Moville.”

Not The First Time

‘There Were Cameras In The Toilets’

1 thought on “A Warm Welcome”