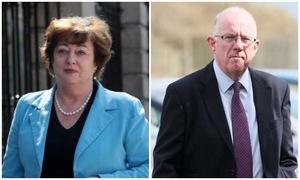 Minister for Justice Charlie Flanagan yesterday announced that he had asked the Inspector of Prisons, Patricia Gilheaney, to conduct a preliminary investigation into claims reported in the Irish Examiner by Michael Clifford.

Mr Clifford reported that a serving prison officer has made certain claims in a sworn affidavit to the Justice Minister Charlie Flanagan about methods used to stem the suspected flow of drugs and mobile phones into prisons – by prisoners and prison officers.

The man reportedly made the affidavit as he has “no confidence in the operation of the Protected Disclosure Act in either the prison service or the Department of Justice”.

News of the affidavit comes after it was reported in September that Michael Donnellan, head of the Irish Prison Service since December 2011, is to step down at the end of this month – despite being reappointed to the job in January for a second five-year term.

In yesterday’s report, Mr Clifford explained that the prison officer’s affidavit includes the claim that a private detective agency was hired to carry out a bugging and surveillance operation without the “necessary legal permits and permissions”.

“A van containing drugs and telephones, associated with a major criminal gang, was allowed into prison campus without the knowledge of the governor and staff in that prison. The personnel in the van were subsequently arrested but the covert operation was contrary to all security procedure at the prison.”

This morning, Mr Clifford reported further on the affidavit.

He reported that the prison officer has also raised concerns about the manner in which some deaths have been handled in prisons – claiming that protocols or procedures for the preservation of scenes were not followed.

And Mr Clifford reported that the prison officer spoke several times about the matter with the late Judge Michael Reilly – who was the Inspector of Prisons from 2008 until his death in November 2016.

“In his affidavit, the whistleblower said as a result of his concerns about prison deaths he undertook a course in DNA and the preservation of crime scene at the garda training college, but found his enthusiasm to professionalise the response to deaths in custody was not shared by management.”

Last August, Mr Clifford’s Irish Examiner colleague Joe Leogue reported extensively on concerns raised by prison inspectors about proper records being kept in relation to inmate deaths, including the concerns of the the late Judge Reilly.

“During his time as prison inspector, the same significant problem arose time and time again, and no matter how many times he called for the issue to be addressed, it would present itself once more, as if his words were falling on deaf ears.

Vulnerable prisoners were dying — and the official prison records of the circumstances around their deaths were not true accounts of what happened in the prison that day.

Every time a prisoner died in custody, the prison inspector would investigate the circumstances around the death.

Judge Reilly’s job was not to determine the cause of death — that was for the coroner — but he was tasked with examining whether the prison staff followed all correct protocols at the time.

A trend, however, was emerging regarding vulnerable prisoners who required special observation — ‘special obs’ as they are known.

In many cases, such prisoners are recognised as having mental health problems, suicidal ideation, or a history of self-harm.

Protocols dictate that ‘special obs’ must be checked on every 15 minutes, and staff must record each check in a log book.

Judge Reilly, however, found repeated incidences where a check of CCTV footage from the day a ‘special obs’ prisoner died contradicted the entries in the log.

…Judge Reilly said he had been told that, in a number of prisons, the approach to record-keeping is to put “as little on paper as is necessary”.

“In one investigation that I had sight of, an officer, in referring to report writing, is quoted as stating: ‘We are only trained on report writing in initial training and they tell you to ‘keep it short and cover your arse’,” he wrote.”

Last November, Mr Clifford reported on a separate matter – that of a protected disclosure made in the Irish Prison Service on September 20, 2017, concerning an allegation of sexual harassment, a payout in compensation and “the deployment of the individual involved in another state agency where he has contact with minors”.

A month later, in December, Mr Clifford reported that, at that point, no investigation into the disclosure had been launched.

The woman later took legal action over the sex acts and the failure to investigate and the case was settled. The Irish Examiner understands the settlement was just short of €100,000.

The Irish Examiner has established that the man and woman in the case have both left the IPS, as per alleged in the disclosure.

Three sources within the IPS confirmed that the woman was involved in litigation with the service, but the exact details are not clear. It is also established that the man at the centre of the allegations has been working for an agency which deals with minors.

Despite the department having these facts since late September, no investigation has been launched.”

In relation to this protected disclosure, this morning, Mr Clifford reported that the matter was  handed to solicitors McCann Fitzgerald to investigate after his reports on it last year.

“Now, nearly a year later, the investigation is reportedly completed but no final report on the matter has yet been written.

With a record like that for handling protected disclosures, is it any wonder that this prison officer used the legal mechanism of a sworn affidavit to make his claims?”

In one question, Ms Murphy asked if disciplinary proceedings have been initiated within the Irish Prison Service within the past three years “specifically with respect to incidences of sexual harassment and or assault”.

She asked, if there were, how many incidences were there, the rank or ranks and/or grade of staff involved and if the matters were resolved.

Mr Flanagan responded with the following to Ms Murphy:

“I am advised by the Irish Prison Service that the Service is committed to protecting dignity and respect across the organisation and addresses complaints of bullying, harassment, and sexual harassment under the Dignity at Work policy for the Irish Civil Service.

I am informed that in the period referred to by the Deputy, one such complaint against a member of staff was upheld after investigation under the Dignity at Work Policy and disciplinary proceedings were initiated on foot of that.

A further three complaints by staff members are currently being addressed under the Dignity at Work Policy. 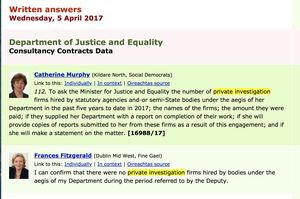 In April 2017, Ms Murphy asked the then Justice Minister Frances Fitzgerald about the number of private investigation firms hired by the Department of Justice since 2012.

“I can confirm that there were no private investigation firms hired by bodies under the aegis of my Department during the period referred to by the Deputy.”

Protected disclosures are everything but for prison officers (Michael Clifford, Irish Examiner)

Yesterday: The Turn Of The Screws

The Journalist Who Came In From The Cold