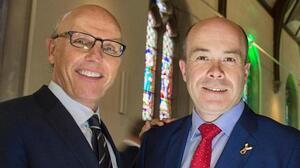 Social democrat TD Catherine Murphy, said it was only through her persistence that the thread of messages, many of which are punctuated with emoji, were released.

“In recent months I submitted a large volume of different and very specific freedom of information requests on various aspects of the former minister’s conduct throughout the National Broadband Plan process,” she said.

“With the exception of a handful, they have all either been declined, sent back for rewording, or have asked for what are already narrow timeframes to be narrowed further.

“Every obstacle in the FoI Act has been put in front of me regarding getting access to basic information, such as the former minister and his official’s interactions with David McCourt, Granahan McCourt, and Enet.”

In declining to grant access to some of the conversation, Murphy was told that “pictures on the WhatsApp messages [such as] refreshments, individuals, and minors” had been removed.

Murphy said she has now been left with more questions than answers.

“I am also anxious to understand if I have been left short of screenshots of the group on the day in question,” she said.

So what happened in the Big Apple, Denis? (Daniel McConnell, Irish Examiner)

7 thoughts on “‘David Already There’”