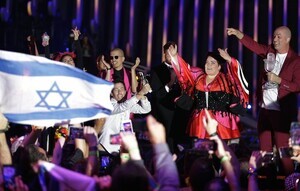 A pro-Palestinian activist group, Boycott Divestment and Sanctions Australia, has joined protesters and artists worldwide in calling for a boycott of the event.

It used a red leaflet featuring the SBS [national public television network in Australia] name and logo to promote its cause. It said: “Boycott Eurovision 2019; Don’t Celebrate Israel’s Apartheid Crimes”.

SBS sent a legal letter saying they must “immediately remove SBS’s trademark from any of your websites, social media pages and any other marketing and promotional material”.

13 thoughts on “One Vision”