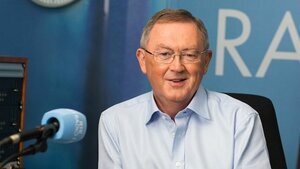 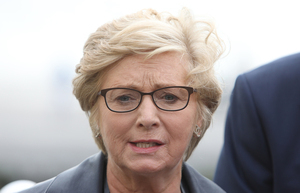 The former Tánaiste and former Minister for Justice Frances Fitzgerald, along with the fellow former Tánaiste Mary Coughlan, of Fianna Fáil, spoke to Mr O’Rourke ahead of Britain’s Prime Minister Theresa May facing a leadership vote of confidence later today.

While speaking to Mr O’Rourke, Ms Fitzgerald spoke about the difficulties of confidence motions; how a minister usually knows their department “inside out”; how a Tánaite must be prepared for difficult questions; and how she was “vindicated” by the Disclosures Tribunal.

On her resignation as minister in November 2017 and her political future, Ms Fitzgerald had the following exchange with Mr O’Rourke:

Seán O’Rourke: “You saw the rough and the smooth, particularly the rough side of it.”

Frances Fitzgerald: “I certainly did, as Michael Noonan said to me ‘you were cut off in full flight’..”

Fitzgerald: “….which is very true.”

O’Rourke: “And you resigned amid that controversy over the treatment of Maurice McCabe and the handling of the tribunal, sorry, not the tribunal, but the inquiry presided over by Mr Justice whose name I can’t quite remember.”

Fitzgerald: “O’Higgins. It was the commission that there was a query about which turned out not to be a proper query at all.”

O’Rourke: “[Justice] Charleton then ultimately, he effectively vindicated the way you’d handled that. But do you think you’ll see the Tánaiste’s office again or what are your hopes…”

Fitzgerald: “Well you know what, I would think Theresa May will be saying today a week is a long time in politics and it certainly is, I mean, look it, I spent 20 years as a social worker, I spent 11 years, like Mary, I spent 11 years in Opposition. Greatest privilege of my life to have been, you know, Minister for Children, Minister for Justice and Minister for Business. And I’m very committed to politics. I enjoy the business and I feel, you know, as long as I feel  a contribution to make, I have the energy, I’ve dusted myself down, after what was an extraordinary challenging period, and you know, I enjoy constituency work. And, you know, we’ll wait and see how things emerge.”

O’Rourke: “Just to quote from something you wrote in the Sunday Independent – “Without the Disclosures Report, I would forever be daubed with believed complicity with events which never happened. But having seen how the system works I believe we must do something to fix it. What needs to change?”

Fitzgerald: “I think a lot needs to change. I do think that we need to take a very keen eye to adversarial politics. And the impact it has on individuals. I was very lucky that there was a Charleton Report and that I was completely vindicated and I was seen to have resigned, you know, in the interests of the country which I did, a personal decision.

“I think we need to look at the interaction between media and politics much more – particularly social media. There is group think that needs serious analysis.”

O’Rourke: “But even after the Charleton Report came out, both Mary Lou McDonald and Jim O’Callaghan, on the Sinn Fein and the Fianna Fail side insisted that the reason that you had to go was because the Dáil had been mislead over events in your department.”

Fitzgerald: “Yes, it was a mealy-mouthed response to what was a very detailed report that took a year to do. But, you know, people see through things. You get on with what you have to do. I’m a TD for Dublin-Midwest. I’ll continue to be that and whenever we have an election, I’ll contest it.”

Ms Fitzgerald stood down from her Tánaiste and then business ministerial role – just ahead of a confidence vote – in November 2017, following a controversy surrounding the 2015 O’Higgins Commission of Investigation into complaints about policing made by former Sgt Maurice McCabe and the legal strategy adopted by An Garda Síochána in respect of that.

Days before she stood down, on November 14, 2017, the Taoiseach Leo Varadkar told the Dáil:

“She [Frances Fitzgerald] confirmed to me that she had no hand, act or part in forming the former commissioner’s [Noirin O’Sullivan] legal strategy.

“Nor did she have any prior knowledge of the legal strategy that the former commissioner’s team pursued.

“She did find out about it after the fact, but around the time it was in the public domain [May 2016] when everyone else knew about it aswell.”

On November 20, 2017, Prime Time’s Katie Hannon reported on RTÉ’s Claire Byrne Live that a Department of Justice spokesperson had confirmed to her that Ms Fitzgerald was first made aware of the legal strategy in May 2015.

On November 21, 2017, Ms Fitzgerald then gave an interview on RTÉ’s News at One, to Áine Lawlor.

[At this point, in November 2017, this email had not been sent to the Disclosures Tribunal which had began its work some nine months prior in February 2017.]

Ms Fitzgerald said the email had been discovered by the Department of Justice during the previous week and she couldn’t recall reading it in May 2015.

When she gave evidence to the tribunal, Ms Fitzgerald told Supreme Court judge Peter Charleton that, on foot of receiving this email:

“I made a conscious decision to obviously not interfere with the Commission of Investigation in anyway because I would have seen it as inappropriate.”

“I made a conscious decision that Judge O’Higgins would deal with whatever issues, as I expected he would, at the Commission.”

Ms Fitzgerald said she didn’t think it was appropriate and that she felt it was a matter for Judge O’Higgins.

She said she never consulted with the then Garda Commissioner Nóirín O’Sullivan, any of her officials or any of her advisors, or anyone else copied into the email.

She also said she wasn’t aware of phone calls that had taken place between the then Assistant Secretary to the Department of Justice Ken O’Leary and Ms O’Sullivan on the same afternoon the email was sent.

Mr Charleton later found Ms Fitzgerald had acted accordingly and Sgt McCabe was “not traduced” before the O’Higgins commission.

Members of Fine Gael have repeatedly said that as Mr Charleton found Ms Fitzgerald had acted appropriately in regards to the email, this “vindicated” her.

However, the Taoiseach himself said on the day of Ms Fitzgerald’s resignation that her stepping down was mainly due to the Department of Justice itself and the lack of answers forthcoming from it.

“Had questions been answered properly and in full, I certainly would not have had to come into the House on two occasions to correct what I had said. The information I have given in the House has always been the full truth, or at least the truth as it was given to me.

“Second, had all of the questions been answered and the e-mails found and put in the public domain seven or ten days ago, I do not think it would have been necessary for the Tánaiste to tender her resignation this morning. It is a very sorry state of affairs that has occurred in the past week or two. That is, of course, why last week I ordered the trawl of all documents in the Department of Justice and Equality, which is why the additional e-mails came to light last week and in the past couple of days.”

At The Minister’s Discretion