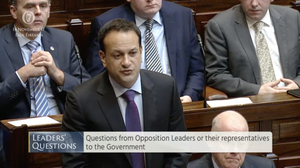 Readers will recall questions have been asked about what knowledge, if any, the former Minister for Justice Frances Fitzgerald – who is currently in the United Arab Emirates on a trade mission – had of the legal strategy employed by An Garda Siochana against whistleblower Sgt Maurice McCabe during the O’Higgins commission.

The legal strategy set out to argue Sgt McCabe had made complaints about Gardai because of a grudge and that evidence of this was based on a meeting Sgt McCabe had with two gardai.

But the strategy was dropped when Sgt McCabe produced a recording of the meeting.

“I spoke to the Tanaiste yesterday, who’s currently in the United Arab Emirates on a trade mission. She confirmed to me that she had no hand, act or part in forming the former commissioner’s [Noirin O’Sullivan] legal strategy.

“Nor did she have any prior knowledge of the legal strategy that the former commissioner’s team pursued. She did find out about it after the fact, but around the time it was in the public domain when everyone else knew about it aswell.”

“They were told, the Department was told about the approach taken by the commissioner’s senior counsel but that was after the cross-examination had taken place.

“So they obviously were not in a position, after the fact, to express concerns about it or to counsel against it.

Readers will recall that, at the outset of the O’Higgins Commission in 2015 – which was looking at complaints of Garda malpractice made by Sgt McCabe, legal counsel for the then Garda Commissioner Noirin O’Sullivan and An Garda Siochana said it would argue that Sgt McCabe was making these complaints because of a grudge.

It was told evidence of this would be based on a meeting Sgt McCabe had with two gardai, Supt Noel Cunningham and Sgt Yvonne Martin, in Mullingar in August 2008.

Broadsheet has previously reported how it was also claimed at the O’Higgins Commission of Investigation that the reason Sgt McCabe had a so-called grudge was because he wanted directions made by the DPP in 2007 – in respect of an “dry humping” allegation made by the daughter of a guard previously disciplined by Sgt McCabe in 2006 – overturned.

But the DPP’s directions were categorically in Sgt McCabe’s favour.

They included the line: “Even if there wasn’t a doubt over her credibility, the incident that she describes does not constitute a sexual assault or indeed an assault… there is no basis for prosecution.”

An Garda Siochana weren’t aware that Sgt McCabe had been fully briefed of the DPP’s directions until he told the commission this on May 15, 2015 and explained how he was totally satisfied with the directions and no desire for them to be overturned.

In addition, Sgt McCabe produced a recording of the meeting in Mullingar to the commission – which turned out to completely contradict the claims made about the meeting.

In response to a question from Mr Martin to Mr Varadkar about reports of a phone call, on May 15, 2015 – from Ms O’Sullivan to the Secretary General of the Department of Justice – in relation to the legal strategy adopted…

“Whether it was on, I know you’ve claimed that it was a call on the day of the cross-examination to the secretary general, we haven’t been able to confirm if that’s the case or not.

“So to answer your questions, the former Justice Minister Frances Fitzgerald had no hand, act or part in the legal strategy, had no prior knowledge of it and she and the department only found out about it after the cross examination had already taken place.” 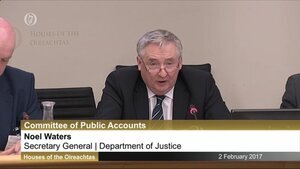 Sec Gen of Dept of Justice, Noel Waters, to step down in February… Govt says he’ll have fulfilled his 40 pensionable years. Only appointed last October. His own role in possible knowledge of Maurice McCabe smear only discussed in Dail today

Department of Justice secretary general Noel Waters is to retire in February. He was appointed in Oct 16 after a two-year period when dept was without a boss and Waters was acting secgen

What Is Going On?

‘Such An Issue Was Never Raised’